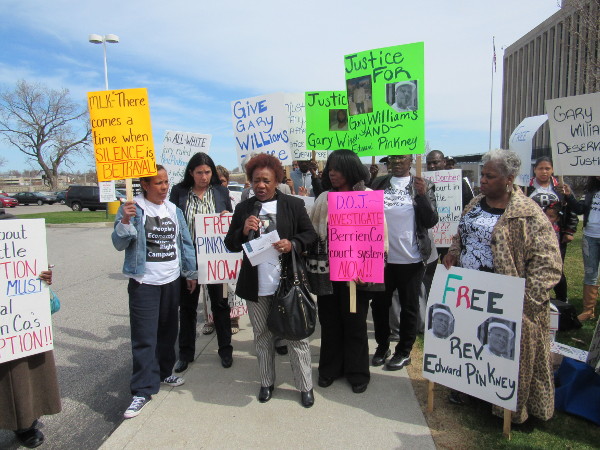 COLDWATER, MI — Today I am speaking from Lakeland prison. If we assume that life is worth living and a man has a right to service, I will say that the august body of assorted judges and politicians must be held accountable for their actions and inactions of wrongdoing. We must find an alternative to injustice in America. We are living in a day where drones hurl through the air and guided ballistic missiles cause a highway of death, destroying the God’s Green Earth and His children.

I am calling for a rebirth of America itself, given the nation’s initial birth with its genocide against Native Americans, inhuman enslavement of African Americans and treatment of poor whites. We, the people, must reexamine this country, the “land of the free” and “home of the brave.” We must come together and stand up: Blacks, poor whites, brown, red, yellow and all others—we the people—and we can win.

I, Rev. Edward Pinkney, demand that we reexamine our economic priorities. I insist that the Federal budget is immoral—it pays the outrageous price of reckless military adventures while cutting out the heart of our domestic social programs.

In Berrien County, Michigan, which is dominated by the Whirlpool Corporation, we have a rogue justice system. It is led by the rogue prosecutor, Mike Sepic, a person who in many cases ignores the law when prosecuting Blacks and poor whites. Mike Sepic bases his decisions on unrevealed deeply held prejudices, which results in inappropriate awards, punishment and conviction. His actions are not based on trying to achieve a just or fair outcome, but rather, on representing the interests of the corporations.

Mike Sepic intentionally charged me with a more serious crime to seek a more severe punishment than was proper—a charge that was against my lawful exercise of a constitutional right to engage in the electoral process. I believe the unnamed and unconditional love will have the final word in reality. That is why temporary defeat is stronger than evil triumph and victory.

We must say to all the people, Black, poor whites, red, yellow, brown, and everyone else, that we can win this fight if we fight together. It’s us against them. Its not one thing, it’s everything. Let’s join together and fight this monster.