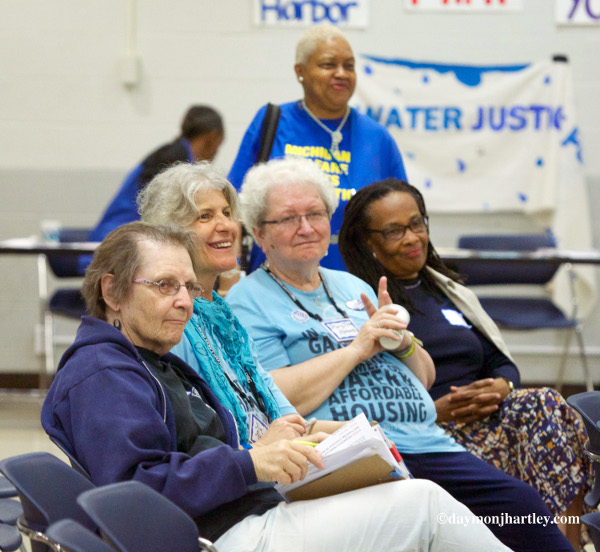 Maureen D. Taylor standing alongside other participants at the International Social Movements Gathering on Water and Affordable Housing, held in Detroit Michigan in May. PHOTO/DAYMONJHARTLEY.COM

DETROIT, MI — As State Chairperson of the Michigan Welfare Rights Organization, I am reminded that in the State Capitol in Lansing stands a bronze statue of seven year-old Helen Keller, blind at birth, memorializing the moment of her historical enlightenment with her teacher, Ann Sullivan. This story made famous in the Oscar winning movie, “The Miracle Worker,” was trying to convey the essence of what words meant to a child born without hearing or sight. The bronze statue captures that moment Helen put her hands under the pump while her teacher, Ms. Sullivan, used hand-to-hand sign language and spelled out the word W-A-T-E-R to her.  Helen finally understood the relationship between the word and what that word represented.

June 1 marks the day the powerful Helen Keller passed away, so it is ironic that in June of this year we are celebrating not an age of enlightenment, but instead we are witness to a period of human darkness that will stain this State for years to come.

It is not necessary to recount the economic climate that residents of Michigan have been struggling through since the recession of 2005 and beyond.  Entire cities and communities scattered across the State continue to reel from the loss of financial foundations built by so many years of fruitful employment. In the US Census of 2010, it was reported that Michigan was the only state to have lost significant population.  In Detroit we know this fact all too well, as do all elected officials who purport to represent the residents.

Over one million residents of Detroit have left this City, leaving us with just under 800,000 to fill the void created by such a dramatic population decline.  Factories that were the backbone of financial stability for millions of families have been slowly phased out.  Computers are taking the place of the American working class, and that trend is best seen here in Detroit and in surrounding factory-based counties. Technology that used to enhance labor today has replaced labor, leaving in its wake the skeletons of neighborhoods all over Wayne County.

We are slipping into darkness, shoved into this draconian condition marked by a false and divisive narrative, which covertly suggests Detroiters have resources, but because of our criminal leanings we don’t want to pay water bills. Poverty is criminalized as the poor are held responsible for not having enough money to pay rising utility costs.  The economic profiles of low-income families are completely overlooked. Consequently, we learn nothing from past civil uprisings, or the current uprisings in cities across the country.

Our calls for relief are mostly ignored. Our tears go unnoticed, and our prayers have been unanswered. We have hope, and try to hold on, but this latest assault against the most vulnerable is galvanizing responses that no one here wants to consider.  A new world is necessary.

Editor’s note: In the next (August) edition of the People’s Tribune, Maureen Taylor will discuss the next steps that the Michigan Welfare Rights Organization and the People’s Water Board are taking the fight for water rights.