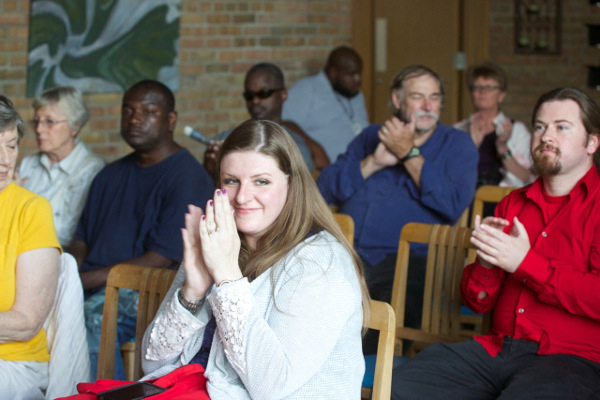 Participants in the Detroit to Flint “Water Justice Journey.” Melissa Mays, (Front) of “Water You Fighting For” in Flint, Michigan, is a mother of three who is slowly being poisoned by the chemicals in the water she has been drinking. Symptoms (which include her children) are hair falling out, skin rashes, suspicious nodules detected internally, vertigo, and a list of other conditions. Melissa says that across the city of Flint, water is clear to blue to almost black.
PHOTO/DAYMONJHARTLEY.COM

“…[A]ccess to safe drinkable water is a basic and universal human right, since it is essential to human survival and, as such, is a condition for the exercise of other human rights.” — Pope Francis

DETROIT, MI — Michigan Welfare Rights Organization and the Peoples Water Board have fought tooth and nail over these last 16 months, in every way possible to convince the City of Detroit Water and Sewerage Dept. that the path they had chosen was both wrong and not cost-effective.

We have tirelessly offered solution after solution to this crisis demanding that a Water Affordability Plan be instituted, even if it is implemented at first as a pilot project to be tested.  Always the answer is “NO,” so we find ourselves again in this painful gap of pending defiance and civil unrest as we are unable to do anything but stop this by any means necessary.

Water Assistance Plans have little value, and are based on pots of money that always run out.  Water Affordability Plans are significantly superior as it is based on water being affordable from the start.  We are not asking for a rate adjustment.  Payments must be made based on income levels, an approach practiced by utility companies across the country.

We urge our elected officials to review this crisis and that they put the issue of mass water shutoffs at the top of the list as the deadline for continued tolerance approaches.  As Michigan Welfare Rights Organization is the recognized union for low-income families, we cannot turn from this struggle.

If our colleagues from the United Nations are correct in that the USA cannot deprive low-income populations of access to clean water and sanitation, we will then pursue the path of litigation as we seek to file suit against this violation of international law.  We will not stop there.

We will press you to create legislation that outlaws such practices now and forever.  We will not stop there.  We will demonstrate, picket, and agitate. We will interfere with business as usual everywhere we can in an effort to erase forever the notion that water is a commodity to be bought and sold.  Access to water is a human right, and must always be held as a common trust never to be denied because people are too poor.  Shame on those who created this concept, and shame on us if we allow this “cancer” to exist without an all out battle against it.

One thought on “Access to water is a human right”