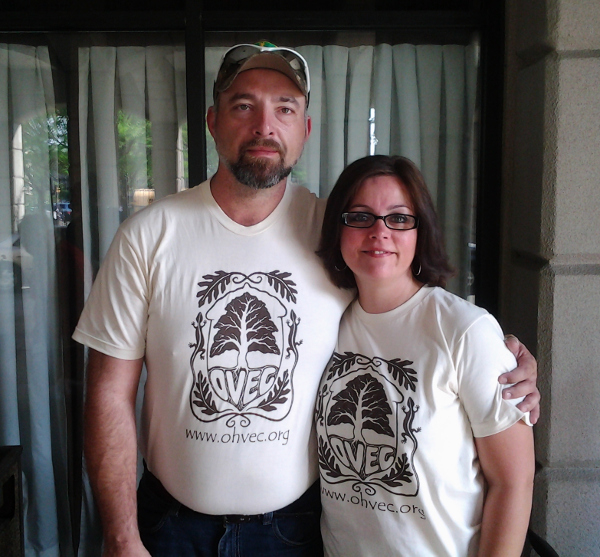 Editor’s note: At the International Social Movements Gathering on Water and Affordable Housing in May in Detroit, the People’s Tribune interviewed two participants from southern West Virginia, Paula Swearengin and her brother William Foley. They are part of the Direct Action Welfare Group and the Ohio Valley Environmental Coalition. They are fighting mountain top removal and for clean water in West Virginia’s coal country.

“My stepfather, father, grandfather and uncles all worked in the coal industry,” said Paula. “My grandfather was in the industry 45 years and died of black lung. We lost our dad to cancer.”

“I was raised in Wyoming County, in the coal camps,” said William. “The water was solid red when I was growing up, it was so tainted and poison. We didn’t drink it but washed our clothes and took baths in it. We had to haul our drinking water. And my dad and my mom’s mom and her dad all died of pancreatic cancer, throat and lung cancer.”

“I drank that water when I was young,” Paula added. “It had high levels of manganese and other chemicals. My little sister was born with a birth defect. She has a cyst the size of a baseball at the base of her brain. She is totally disabled. That was our childhood.”

She said the coal industry uses hundreds of chemicals to clean the mined coal. The waste water from this process (coal slurry) is injected into underground mines and poisons the ground water.

“My neighbor’s little girl got sick with a rare form of bone cancer and another little girl got that kind of cancer, and so I started trying to connect with people about that because I got angry,” Paula said. “And then I found out that mountain top removal was in my back door [which also causes water pollution and other disasters]. Then when the Elk River chemical spill happened [in 2014] I got deeply involved with that. It’s all connected. We live in a toxic dump.”

Paula noted that the area is dependent on the coal industry. She said the area’s political leaders are beholden to the industry, and workers keep re-electing them because they fear for their jobs. She would like to see “greener technology and a diversified economy” in West Virginia.

“We have a big racial divide in the nation,” she added. In West Virginia we’ve lived under this stigma that we’re hillbillies with no teeth, shoes and brains. We’re human beings and we bleed like everyone. We live in a sacrifice zone. This nation is fueled by the blood of my people. When you turn on your lights, another child is getting cancer in Appalachia. It’s not a racial thing, it’s a poor thing. They’ve kept us depressed and poor because of the coal industry . . . The industry and corporations and our legislators want to keep us divided. They want to make people think it’s a Black issue, but it’s a human issue. We’re all suffering and there are people suffering with a lot of issues across the nation. And that’s why I came here, hoping we can build an international collaboration, get the corporate money out of our elections. It needs to be a group effort.”