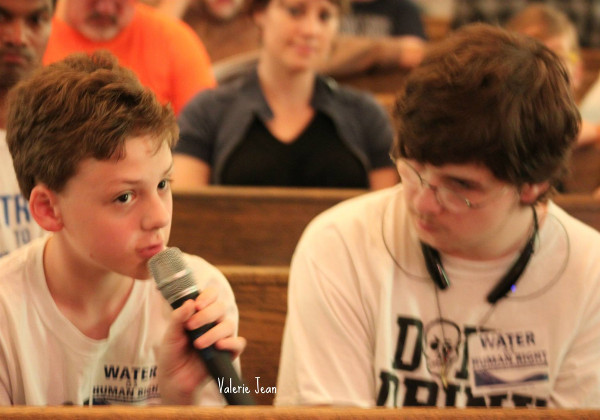 This boy’s community is getting sick as a result of the poisonous Flint water. His mother’s health deteriorated with no one held accountable.
PHOTO/VALERIE JEAN

Privatization: to transfer from public or government control or ownership to private enterprise

FLINT, MI — In 2001, the notorious right-wing think tank, Mackinac Center for Public Policy, devoted their quarterly magazine “Michigan Privatization Report” to the city of Detroit. The menu of articles dealt with everything from Detroit’s Emergency system, their DOT (mass transit, bus service), to the mammoth water treatment plant that services multiple counties in lower Michigan. The article was a wish list, extolling the virtues of corporate takeover of these public assets.

Both Detroit and Flint’s municipal water systems are in the hands of a “Regional Authority” through a lease (Detroit) or outright takeover (Flint). In both cases, Emergency Manager orchestrated the moves. Experts warn that these transfers become easy pickings for outright corporate takeover, not to mention the investment banks and bondholders already hooked in.

Whose Water? Our Water! Reclaim the Commons

In Flint, residents have been experiencing living Hell ever since the Emergency Manager ordered the switch from Detroit as a water source to Flint River water. Numerous health problems include rashes, loss of hair, and severe physical side effects. Chlorine smells and brown water are common occurrences, while we’re told the water is SAFE! Letters from the city warning residents of excessive levels of cancer causing TTHMs in the water advise that “elderly, infants, and those with compromised immune systems should consult their doctor”.

Many residents opted to independently test their water only to find dangerous levels of lead and copper as well. When General Motors cried foul because Flint River water was rusting their parts, they were allowed to return to the Detroit water source. Residents demanded the same option, but were told it was “inconceivable”.

The Flint contaminated water is also the highest rate in the nation! Eight families at Ambassador East Mobile Home Park are still without water after two years. (The landlord lives in another state, and refused to pay the water bill). Most of the residents are disabled and go to a neighboring cemetery to get water—not knowing from day to day when the city will execute evictions of the recently condemned park.

The drive to turn over water—that is life—to corporate is well under way in Michigan, and moving rapidly. The process of fulfilling the dreams of Mackinaw Center for Public Policy clients is accelerated via the Emergency Manager system. To date, 17 municipalities and school districts are under this mire of dictatorship. With local democracy gone—the ability to redress these life threatening grievances are gone. Toxic water and a toxic system are inseparable in this fight.