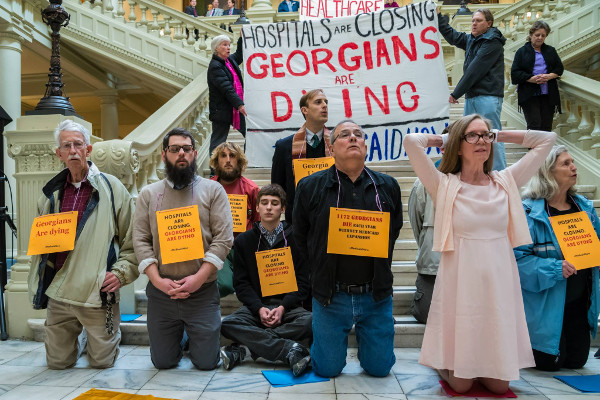 Protest in Atlanta, GA, where the governor vowed to not accept federal funding for Medicaid expansion; 1200 people died in Georgia last year due to a lack of healthcare.
PHOTO/STEVE EBERHARDT

Even if one denied that health is a human right, they would be hard pressed to deny that freedom, for example, is not a human right. If freedom is a human right, then healthcare should be a human right. This is because many medical disabilities, from Multiple Sclerosis to Alzheimer’s to severe depression and schizophrenia, infringe upon our freedom. Therefore, even under the current capitalist system, if we are to afford human rights their due respect, then we should admit that processes which ameliorate health conditions should not come with a price tag attached.

Why should healthcare as a human right be free of charge? Because we have human rights by virtue of being human, not by making any sort of exchange. Do we have to pay for our right to freedom of speech or assembly? Arguably, our health is at least as important as these capacities. Furthermore, since healthcare should be free, so too, should particular therapies which fall under the umbrella of caring for health. These include therapies for physical and mental ailments such as cancer and depression.

In capitalist societies, it is assumed that goods and services should be exchanged for cash. So there is a tension between capitalism and human rights. Yet if this essay’s argument is right, this practice contradicts deeply held intuitions about human rights as well as international law. The answer? Provide healthcare for all, or as I prefer to call it, care of health as a human right.

2 thoughts on “The human right to healthcare”