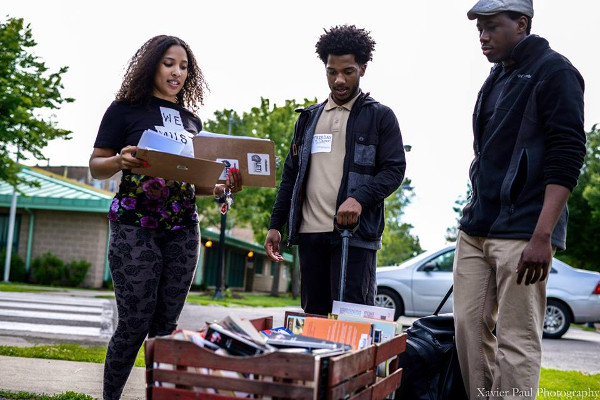 People’s Tribune correspondent Adam Gottlieb interviews Damon Williams, co-director and founding member of The #LetUsBreathe Collective in Chicago, IL. This is part of a longer interview about the remarkable story of #LetUsBreathe and Lost Voices.

Adam Gottlieb: What is the #LetUsBreathe Collective and how was it formed?
Damon Williams: The #LetUsBreathe Collective is an artistic activist organization. It is a hybrid of direct action and service through an artistic lens. It started out of the Ferguson moment . . . Chicago being the closest major city, my sister Kristiana Colón was really upset and wanted to go right then . . .  but then she thought, ‘maybe I shouldn’t just go with my anger, but be in service.’ We called down . . .  just to see what was needed, what people could bring outside of water. And the initial response was: ‘everybody wants gas masks.’ And that was a really chilling response to hear.

We started a gofundme to get gas masks, and we were just looking for a few thousand dollars, but . . . our fundraiser got legs that we did not expect . . .There’s only so many water bottles you can buy, so many fruit snacks and diapers, and even gas masks . . . So we went down in two trips, and we met at a church, St. Marks. This was kind of the headquarters of all the outside supporters  . . . [We were told that] there was a group of protestors who had been camping out and who were the most serious [Lost Voices] . . . We were kind of expecting—and no offense—kind of hippie-ish people, like Occupy-types, cause we were like ‘camping outside?’ . . . That didn’t align with what we were about to find.

We went there and it was, honestly, those who would be identified as gang-bangers . . .  outside, building a little community with one tent, a few chairs, a card table. And they just really had a ferocity about them and a consciousness that was deeply inspiring and connecting, cause they were speaking the tongue of somebody you would meet on 79th street, or somebody you would meet on Madison Ave on the West Side, people I really related to. But the ideas they were talking about from being in this trauma for 12 days were so profound, and such a clear criticism of how violent, exploitive, and negligent the system is to people. And we were just instantly moved. And they were also very vulnerable, because in this time, Ferguson . . . was such a hot button that people who would be described as anarchists, and . . . “outside agitators,” were the majority of the people in the street by now. And what they were doing was agitating, and throwing water bottles at the police, trying to inspire conflict. But the people who were most familiar to the police, who were the easiest target . . .  were sleeping outside, and were visible and were getting arrested regularly . . . So we wanted to help amplify and let people know that they exist.