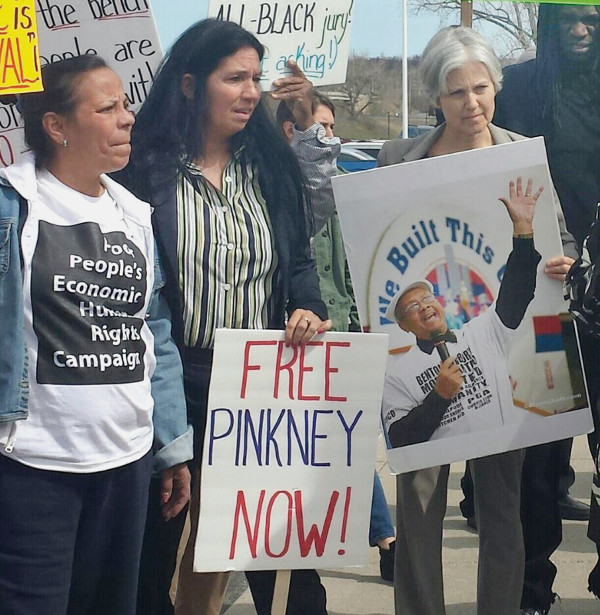 COLDWATER, MI — My name is Rev. Edward Pinkney. I am in prison in Coldwater, Michigan, a victim of racism and corporate power in Berrien County, Michigan. I am an internationally recognized activist who fights for justice for all, and I am president of the Black Autonomy Network Community Organization (BANCO).

I was accused of a crime I did not commit. Because I exercised my democratic right to recall Benton Harbor Mayor James Hightower, who supports the Whirlpool Corporation and not the residents of Benton Harbor, I was charged with five felony counts of changing dates on petitions! I was sentenced to 30 months to ten years. This is a death sentence for a 66-year-old man.

While I was out-of-town celebrating my wife’s birthday on April 25, 2014, the Benton Harbor police blocked my street with its military trucks and sent in the Special Weapons and Tactics (SWAT) team to arrest me on these trumped-up charges.

There was absolutely no evidence against me and none was presented at the trial that would implicate me of any wrongdoing. I am being punished by the criminal Berrien County justice system and local authorities in the service of Whirlpool, a multi-billion dollar global corporation with headquarters in Benton Harbor. As a long time resident of Benton Harbor, I opposed Whirlpool’s plan of land takeover to gentrify Benton Harbor and turn the area into a multi-million dollar golf resort and playground for the wealthy elites. I have watched the loss of jobs, homes, and dignity for the residents of Benton Harbor as a result of their actions. I have also spoken out against the attack on democracy in the governor’s appointment of Emergency Managers in place of democratically elected officials to guarantee corporate profits in Benton Harbor (and other Michigan cities).

For my active outspokenness, I am paying a debt to society, which I do not owe, with my life, my family life, and my community.

A motion for bond pending appeal has been filed with the Michigan Court of Appeals. There were numerous violations of my human rights during my trial. Three witnesses testified that I was not present when petition dates were altered. The prosecutor was allowed to use my community activity as “evidence.” This is a serious violation of my First Amendment rights and due process.  The judge and prosecutor worked together as a team against me because of their support for Whirlpool. In addition, we have evidence that some of the all white jurists knew each other, but did not reveal their relationships to the court.

It is our duty to hold all elected officials, judges, prosecutors and law-enforcement accountable. All corrupt officials must be tried and imprisoned.  We must demand that the news media print the truth. We must stand together and bring down the corrupt criminal justice system, not just in Berrien County, but all across America.