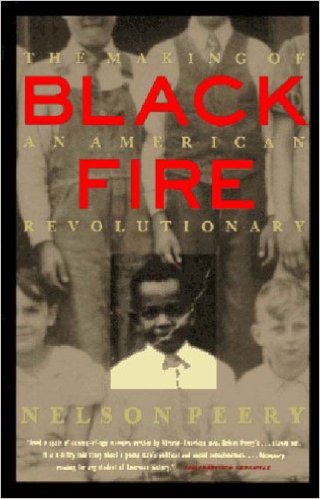 On  April 29, The New Press will publish Black Fire: The Making of an American Revolutionary by Nelson Peery. This book should be read by everyone fighting to end poverty and injustice in America.

Black Fire recounts one man’s physical, moral, and political journey through the hell of being black and poor during the Great Depression and the Second World War.

The book begins in 1928. After standing up to the crude discrimination in the Railway Postal Service, Nelson Peery’s father is banished to Wabasha, Minnesota, where the Peerys are the only black family in a town of 2,300. The young Nelson quickly learns that the harmless mischief tolerated from white children could get him or his family lynched.

Later, the family moves to Minneapolis at a time when there were fewer than 1,000 blacks in the Twin Cities. The Peery family is “a little island set off in a vast sea of blue eyes and blonde hair.” As he grows up, Nelson and his family face poverty and discrimination. He and his gang of friends, The Cavaliers, struggle to find the best way to confront the Jim Crow discrimination of a hypocritically liberal city. He falls in love, receives some civilian military training, and spends a desperate summer hungry and afraid, riding the rails as a hobo.

When the Second World War comes, he volunteers and is sent to the Arizona desert to train with the all-black 93rd Infantry Division. Black Fire shows what the brave men of the 93rd Infantry went through, as they and their families endured insults, humiliation, and violence in a nation they were preparing to defend. The book also describes the tremendous solidarity and camaraderie which developed between the men of the 93rd, a special affection  expressed in constant teasing and joking with  one another.

The final section of the book covers the Pacific war and the six months following the Japanese surrender. The 93rd Infantry Division is sent to the Philippines, where as the war ends, the U.S. government is preparing to crush the revolutionary movement. At this point, the author has to make far-reaching decisions about his life and his obligations as a revolutionary.

Black Fire refuses to romanticize America, the Second World War, the Depression, the working class, the Communist Party, or its author. It shows the reality of white workers in Detroit striking to prevent blacks from getting jobs in the auto industry in 1943 and the hypocrisy of a country which fought fascism with a segregated army. It is a brutally honest book. When it describes acts of cruelty and cowardice, the author’s anger comes burning off the page. When it describes a young man’s restlessness and soul-searching or the physical beauty of America, Black Fire can be lyrically beautiful.

Black Fire ends in 1946, but it raises profound questions that everyone fighting today for change in this country needs to think deeply about.  What is the role of the individual in the fight for change? Why have the powerful in America aways succeeded in pitting the white poor and black poor against one another? What is the relationship between a revolutionary’s right to some measure  of personal happiness and his or her obligation to society?