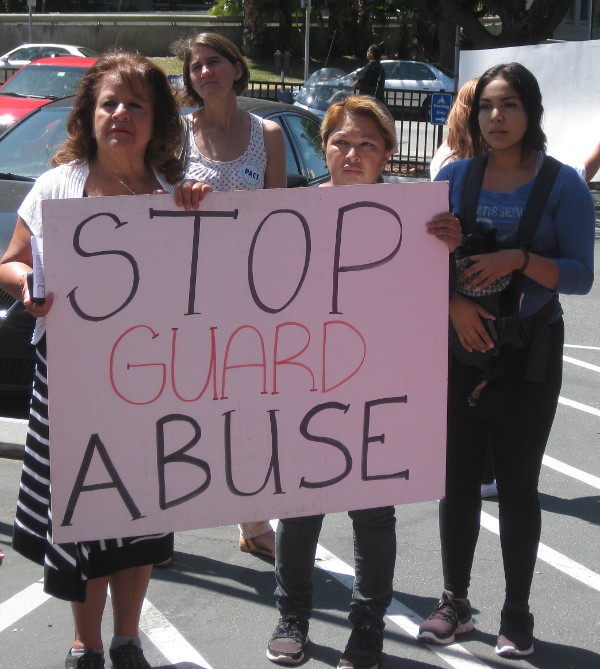 SAN JOSE, CA. — Friends, families, and supporters of inmates incarcerated in the Santa Clara County Jail here rallied on September 4 to protest the brutal murder of Michael Tyree in his cell by three correctional officers. Tyree was in jail awaiting a bed in a drug treatment program, and actually would have already been released except for the fact that he was homeless and had no place to go. The cause of death was blunt force trauma, from repeated body blows by the three officers when he allegedly refused to take his medication. They then turned out the lights and left him unconscious in his cell until he bled to death from a severely lacerated spleen and liver.

The facts of the case were so indisputable that the Sheriff had to arrest the three officers on September 3 and charge them with murder, the first time this has happened in the 165-year history of the Sheriff’s Department. Community members were outraged that it took such an appalling murder to force the Sheriff to act, when they had been complaining about guard violence and abuse for years and even decades. Rev. Nolan recalled the Sheriff’s “Goon Squad” of the 1970s. When they came for you, you knew you were going to end up in the hospital. According to the Prison Law Office, Santa Clara County has one of the worst jails in the state.

The Rally was called by Silicon Valley DeBug, NAACP, PACT (People Acting in Community Together), and Coalition for Justice and Accountability. The crowd was addressed by the mother of Mario Martinez, who died from an asthma attack after being denied medical treatment in jail in nearby Alameda County. Laurie Valdez and Jim Shulman, whose loved ones were killed in separate incidents by local police, testified as well.

“We want justice for our people,” chanted the demonstrators as they marched around the high-rise jail, while inmates banged on the bars above. Who are our people? They are certainly our friends and family, but more. As one supporter told me, “If they are human beings who are being mistreated, they are our people.” If the homeless, the poor, and all people discarded by the system can learn to stand up for one another, regardless of color or nationality, as these ralliers did on September 4, then Michael Tyree’s death will not have been in vain.