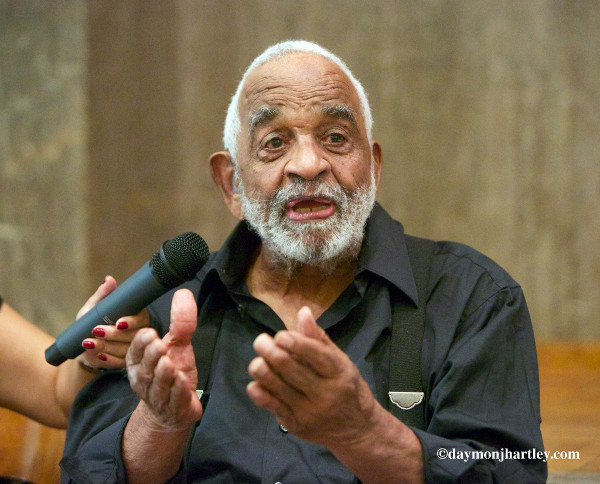 Nelson Peery speaking at the celebration of his life on his 90th birthday.
PHOTO/DAYMONJHARTLEY.COM

Upon Reading
Man With the Hoe

Strangling in the muck of history
He leans against the tavern wall
And silently gazes across the Avenue
Where watchdogs of property
With vulture eyes and shotguns
Impose Pax Americana.

With the brooding hatred of the helpless
With the weight of tradition’s chains
Upon sagging shoulders,
He indicts
The lords of heaven and hell

You, who stole the rapture of his youth,
You who heaped grief upon sorrow,
You who hoped to silence hope
With the authority of fear —
Listen to the silence —
Do not believe
It is submission,
Or that the lowered eyes no longer see
The mountain.

For he is the son of the slave
Who built and brought down
Empires of the ages.

His are the hands that created
The vaulted heaps of gold and silver,
Inspired the art, the soothing music —
That dragged humanity from the swamp.

You! Lords of the universe!
Do you believe those who concretized dreams
Do not dream?
Or those who materialized vision
Have no future?

He is the gathering storm,
The whirlwind that thunders
Condemnation!

More than destroy the old —
The guns of pride, of property and privilege,
He will build the world of peace and love.
And dance with six winged Angels.

Editor’s Note: “The Man With the Hoe,” Edwin Markham’s 1871 poem, showed the laborer bent down under the system that oppresses him. Nelson’s poem shows a worker, not submissive, but part of the gathering storm of revolution.