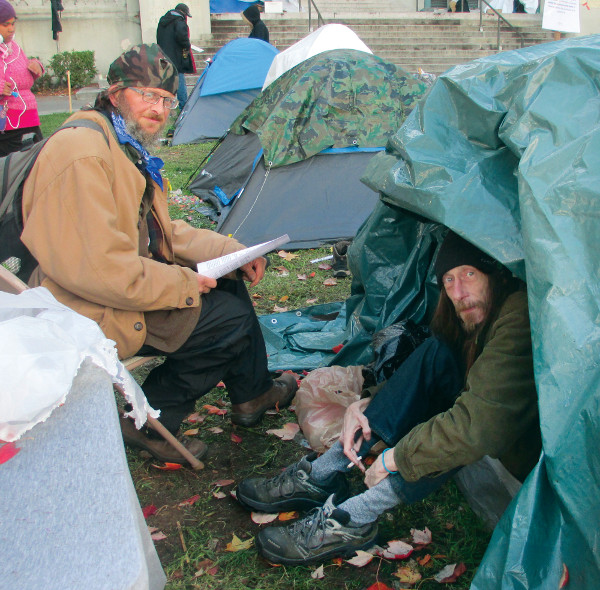 BERKELEY, CA — For two weeks a group of homeless have occupied City Hall in protest of the new anti-homeless laws. We protest for equal rights, equal protection, and demand we be allowed to care for ourselves in the commons.  The city wants to shuffle, harass, and torture us, drive us out of town. This is the tactic most cities use, instead of dealing with the problem. The homeless community is the same as the housed, but without hard walls. We want the same things as the housed. .

Since ‘Liberty City’ has been occupying, we have accomplished the following:  We have provided shelter and storage for over 60 people; one hot meal per day at the cost of $1 in food stamps;  vacinated and registered the protesters dogs and cats; handed out  over 100 blankets and over 50 jackets for the cold weather; provided safety, security, privacy and stability for the protesters.

This was all accomplished by us, with community support. We have demonstrated success at almost no cost to the city. We have handled 7% of Berkeley’s homeless in two weeks.

Our protest is threatened with 647e, ‘illegal lodging.’ The law clearly states ‘without the permission of the owner’. We own the commons, and have given ourselves permission to be there. The Berkley Police Department insists on referring to the occupation as an encampment. This is a blatant attempt to create an excuse to violate our rights.

Update: On December 4,Berkeley police raided ‘Liberty City,’ confiscating tents and possessions, arresting Mike Zint, Anna Davis, and Casey Hosier. The day after being released, Mike made this statement: “Banners are going up and signs are being made. Tonight, these homeless are without the shelter thanks to the city’s unconstitutional action of removing our occupation.”

Since then a symbolic tent has been erected and more signs painted, protesters sitting on chairs in front of City Hall and under a tarp to shelter from the rains. Davis and Hosier were again arrested for ‘lodging’ under this tarp.

‘Liberty City’ remains as a shining example of how people can take care of themselves and each other. Imagine if the whole economic and political system was in our hands and run that way, freely sharing the abundance we ourselves create? Only the profits-only laws of capitalism and their fascist enforcement prevent this. Stop the criminalization! Housing for everyone! [Sarah Menefee, ‘First they came for the homeless’, the People’s Tribune]