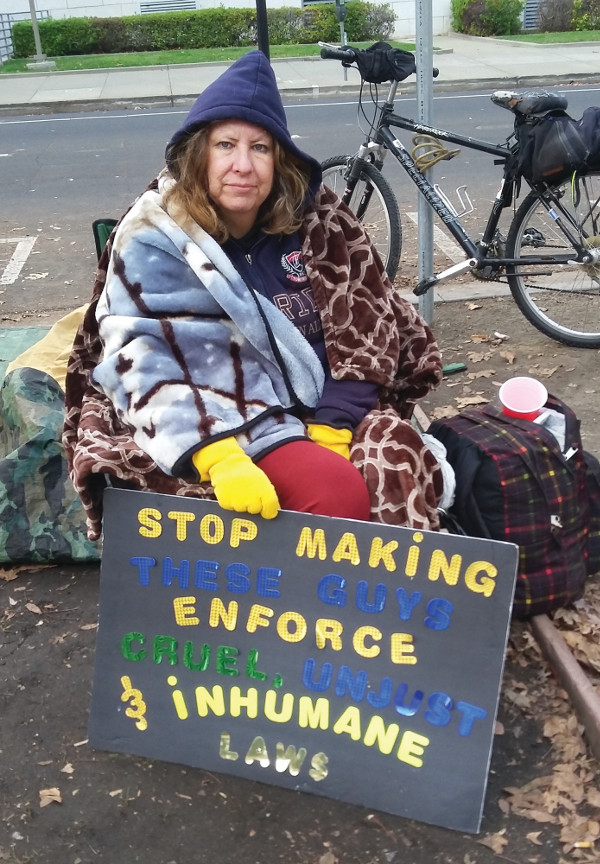 Suzanne Hastings at the Sacramento, California City Hall Occupation. Over 50 officers, in full riot gear with helmets, boots, and vests came to break up the protest encampment.
PHOTO/CATHLEEN WILLIAMS

SACRAMENTO, CA — “Last night, Dec. 20, 2015, I spent what can only be called the night from Hell [at the homeless protest in front of Sacramento City Hall]. Even with a tarp over and under me, the rain became a very real threat. If your gear gets wet, you’re up the proverbial creek without the proverbial paddle. So you fight to protect your gear. You fight to keep your tarp from blowing away. It’s a war between you and the wind. You’re in the trenches. The wind is firing over-head and, like all wars, you must keep vigilant.”—Suzanne Hastings, Sacramento Writer and Activist

At 2 A.M. on January 2, 2016, the police came to break up the homeless protest encampment in a squad of over 50 officers, in full riot gear with helmets, boots, and vests.

Their target: 20 people, all asleep, who had chosen the threshold of City Hall to call for repeal of Sacramento’s “anti-camping ordinance,” which criminalizes “living outside.” The encampment is organized by the Community Dinner Project, which had “unlawfully” served dinner at that site for a full year to protest Sacramento’s anti-homeless ordinances.

A few days later, again in the middle of the night, the police launched a second raid, telling one protester he had to get up or face arrest. When he failed to immediately comply, he was taken to jail because he was sleeping.

In Berkeley, California, in November and December, until evicted by the police, “Liberty City” sprang up on the lawn in front of City Hall inspired by the group, “First They Came For The Homeless,” to protest new onerous ordinances.

In Santa Cruz, CA,  last summer, the “Freedom Sleepers” camped out at City Hall to oppose ordinances that make it illegal to sleep in public covered or uncovered between the hours of 11 p.m. and 8:30 a.m., and also criminalize sleeping in cars.

In 1966, Reverend Dr. Martin Luther King, Jr., summed up the situation today with far-seeing words: “[Now] we have left the realm of constitutional rights and we are entering the area of human rights . . . it is morally right to insist that every person has a decent house, an adequate education, and enough money to provide for the basic necessities for one’s family.”

A few years ago Occupy Wall Street rocked the country, but the American people have long resisted by occupying centers of political power. In 1894,  “Coxey’s Army” headed for Washington to establish protest encampments. Then, as now, this inclusive, poverty-driven, multi-ethnic movement was ridiculed by the press and violently attacked by the police.

The official response is the same today —but today, the jobs aren’t coming back due to the technology that is revolutionizing the economy and creating greater and greater abundance with fewer and fewer workers. The challenge faced by homeless activists today is to claim this abundance—including the right to housing—in the name of the millions of ordinary people who are living on the edge of survival.