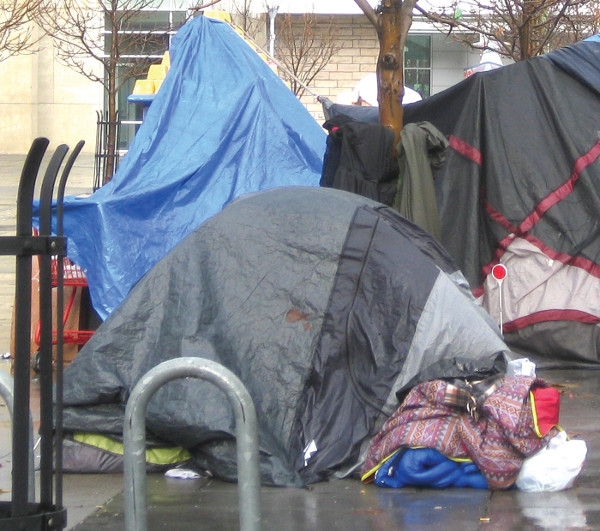 San Jose, CA brags that it is the “Capital of Silicon Valley”, a world-class center for technology and innovation, but it cannot even provide basic human necessities for its people. Thousands are homeless, forced to live in tents outside in the rain, like these on the doorstep of San Jose’s futuristic City Hall.
PHOTO/SANDY PERRY

SAN JOSE, CA — On December 15, 2015, after 18 months of struggle, the homeless in Santa Clara County won written commitments from the San Jose City Council (SJCC) and the Santa Clara Board of Supervisors (BOS) to work together to create a pilot sanctioned homeless encampment. This is the first time either jurisdiction has recognized that people without housing have a right to a safe and legal place to sleep. This also means, that for those lucky enough to get into this pilot camp, the sweeps and raids will stop and the unhoused will be treated with the respect they deserve. Sanitary facilities and social support services will be provided at the campground. It has not yet been determined how many homeless will be served at the pilot camp.

The BOS and SJCC actions were a complete reversal of long established policy. Just one year prior, on December 4, 2014, San Jose savagely closed the country’s largest homeless encampment, known as the Jungle. On that terrible day hundreds of homeless watched helplessly in the mud and pouring rain as their tents and other possessions were destroyed by bulldozers and fed into compactors. Rental vouchers were provided for about half of those displaced, but many of those who got vouchers have been unable to find apartments.

In the spring of 2014, half a dozen affordable housing activists shifted their attention from low-income housing advocacy to working with homeless rights advocates and the homeless. In part, this shift came in response to rumors that San Jose was planning to close the Jungle. Homeless advocates and the homeless themselves began appearing at SJCC meetings to demand humane treatment for the homeless, including legal places for the homeless to sleep at night. Advocates and homeless individuals and families took every opportunity, and made opportunities where none had previously existed, to get media coverage and build support in the community. The twin crises of homelessness and skyrocketing rents had become (and remains) too big for the media to ignore.

The strategy for the campaign was simple: at every opportunity, arrange for the homeless to tell their stories and to demand sanctioned campgrounds. When the council “explained” that sanctioned encampments have been proven not to work, the homeless would simply ask the councilmember(s) to offer another solution. No other solution was ever offered. A second part of the strategy was to continually call attention to the hundreds of millions of public dollars spent every year on camp sweeps, police actions, and medical care.