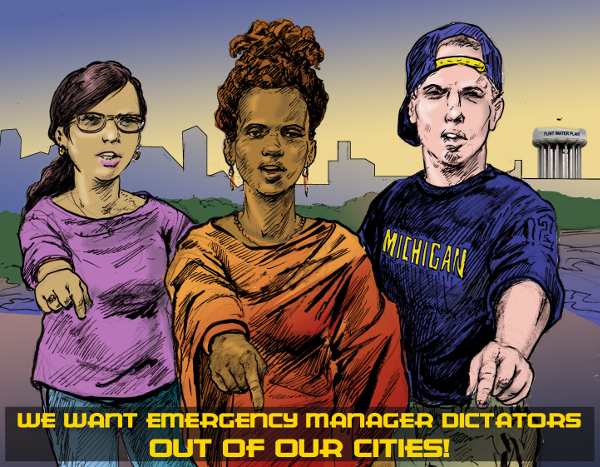 A battle is unfolding in America. The workers are fighting for life itself— for food, water, shelter, healthcare, and education against a corporate class that has openly taken over government and is employing it as an instrument of brute force to impose its will.

Nowhere is this more evident than in the state of Michigan, where legislation was passed that empowers the governor—in the service of the corporations—to take over whole towns, cities, counties and school systems. This law gives unelected governor-appointed emergency managers the power to dissolve contracts to lower labor costs, privatize public resources, hand public assets like water over to the corporations, and do away with local governments. Emergency management is the primary means of doing this.

In Flint, the emergency manager made the decision to switch the city’s water source to the highly polluted Flint River over the objection of the residents. As a result, a city was poisoned. The intent of the switch was to pave the way for a complete takeover of Michigan’s water by the giant water companies. This shows how ruthless rule by corporate power is.

This corporate “dictator” law is no longer confined only to Michigan. Although the laws in other states do not yet have the power of the Michigan law, nineteen states and the District of Colombia now have some form of the Emergency Manager law. The public school system in Chicago is now targeted by Illinois Governor Rauner for take over.

We are in a new era. As the economy continues to transition to production of goods and services by robots and computers instead of wage labor, the number of jobs shrinks and those that remain are increasingly low wage. Workers cannot buy and capitalists cannot profit. To maintain their wealth and privileges in the face of a dying system, the corporations need fascism. They are putting into place a militarized police state aimed at containing the struggle of the workers for their survival. The fascist emergency manager system, which denies democracy, is an essential part of this process.

The poisoning of the people of Flint continues to draw the attention and ire of people across the nation. Acts of solidarity are broad with the recognition that government is failing to protect the most vulnerable among us, children. Individuals and organizations alike are taking the situation to task and trying to meet the needs of their sisters and brothers in Flint. This solidarity expresses the underlying desire of people to come together and cooperate. We can stand on this sentiment as we fight to create a whole new society where humanity can cooperate.

The only thing standing in our way is a system of private property and fascist laws designed to benefit the owners of productive property. If we as a society owned this property in common, we could guarantee that the future of our children would be one of peace, health and well-being. The future is up to us!