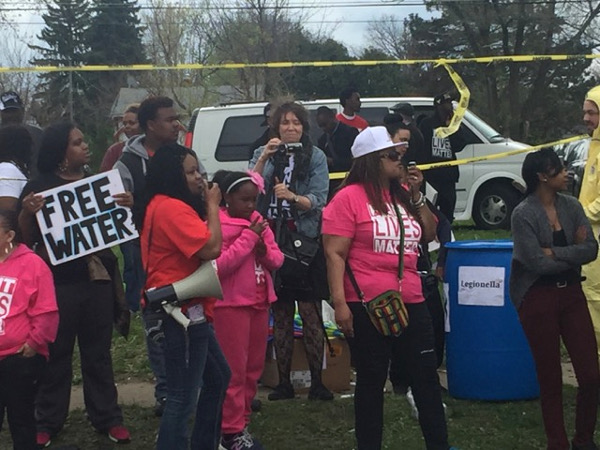 Flint rally where residents urge President Obama, on his recent visit, to resolve the Flint water crisis. The sign on the trashcan says “Legionaires,” which is a disease residents have died from after the water contamination. On the right, a man wears a hazmat suit.
Photo/Paul Spectacle Productions

DETROIT, MI — Walking door to door in Flint, MI, to ask residents about their need for water, or water filters, or access to health care exposed the absolute horror of this nightmare. What we see on television does not compare to what the residents really have to face and try to live through.

At one home, I met a granddad who introduced me to his two-year-old grandbaby who recently had open heart surgery. Seems that since the child was born, the family had been preparing her infant formula and all other meals and all baths using the poisoned water coming through the pipes. I met a woman who showed me the scar left after a tumor was removed from her stomach—another little gift, she called it, found in her after drinking poisoned water for the last almost two years. I met retirees who showed me handfuls of hair that come out after merely stroking the head. I met others who showed me the teeth that fell out while brushing them. At home after home, I met wonderful men, women and children who are living through the most dastardly crime committed against our fellow countrymen in modern history.

The two year anniversary of the Flint water crisis was just days ago, marking the day when public water was switched from clean Detroit water, to the polluted and lead-filled Flint River. The people in Flint didn’t matter, so the risk of allowing poison to flow through the pipes into their homes was not important enough to take the necessary precautions. The people in Flint don’t matter today, because the same poisoned water still flows through the pipes and into their homes. The water filters last at best for 30 days, so many of the families I spoke to needed new ones and needed both water and new filters delivered regularly since they had no transportation. All of this because of the imposed Emergency Managers who thought it too costly to pay for clean and safe water.

That two year old, that stomach-scared woman, those retirees, and the man with his individual teeth in a cup will live and die with the after effects of this great American tragedy and even beyond since lead poisoning imbeds itself in the DNA of the affected person. Who knows how long it will be before the strain of lead-based poisonings will run out?

The last home I visited had a pet feeding dish on the porch. I declined the invitation to come inside as the homeowner asked me to, suggesting that I was afraid of dogs and cats, to which he responded, “…THERE ARE NO PETS IN FLINT… we gave them water to drink and that was that.”