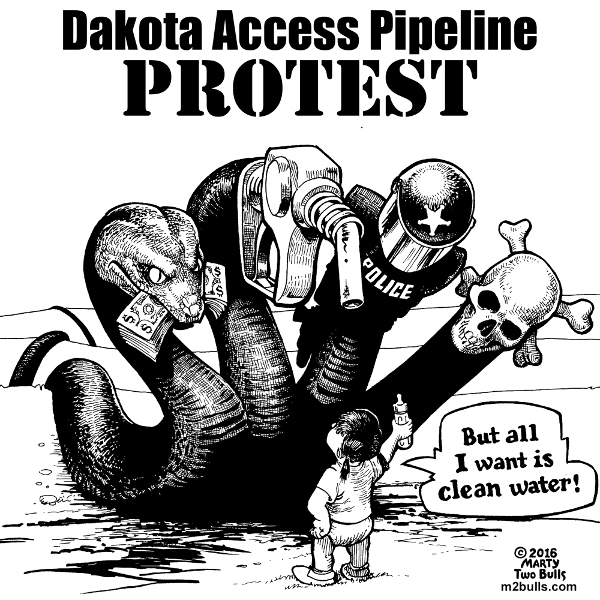 When the Standing Rock Sioux of North Dakota discovered that a pipeline carrying fracked oil was to be built through their land, poisoning the land and its people, there near the headwaters of the Missouri River, destroying sacred sites and burial grounds, they stood up to block the machinery of destruction. This ignited a resistance that has captured the world’s attention, and gathered the support of hundreds of tribes, and massed thousands of supporters to the site in the struggle for water and life.

In response, the governor of North Dakota called out the National Guard on behalf of the private oil company against the protesters. Private security hired by the pipeline company pepper-sprayed and set attack dogs on men, women and children. Because of the defenders bravery and solidarity, construction has been at least temporarily halted. The people have vowed to remain as long as it takes to protect the land.

With their many dangerous pipelines leaking and spilling their poisons everywhere, their mauling of the Earth with fracking, only the oil companies, with immense power over and within the US government, benefit from this plunder. With the poisoning of waters in such cities as Flint MI and across the country, the plundering of the Earth by mineral extraction industries, and the use of water by private corporations, this has become a flashpoint in the people’s resistance to corporate rapacity.

This struggle represents the unity of working people who have little or no stake in this corporate plunder. The native people at Standing Rock whose land is being decimated suffer from 85% unemployment and the highest poverty rate in the country. A growing section of the working class is heading in this direction, thrown out of the capitalist system by automation, no longer exploitable, targeted by police brutality and murder, their communities torn apart and their land and water poisoned. The so-called oil boom in North Dakota has mostly benefited the owners of the oil companies, leaving many people who go there for work homeless or laid-off and stranded.

This conflict is coming to a dramatic head as more and more people are driven into poverty, despair and no future. This is unifying us around a common cause, the absolute necessity for a radical change in the economic system—from one of exploitation, artificial scarcity and destruction, to one of cooperation, with each other, the world around us and the Earth.

Our stand is to hold the government responsible for protecting the Earth and its people. We can unite to create a cooperative society—this one global, national and regional—based on the abundance the new tools of production make possible, along with a social structure to support it. A new Fire is burning.  This is what Standing Rock is to us all.

One thought on “Standing Rock: the people vs corporate destruction”