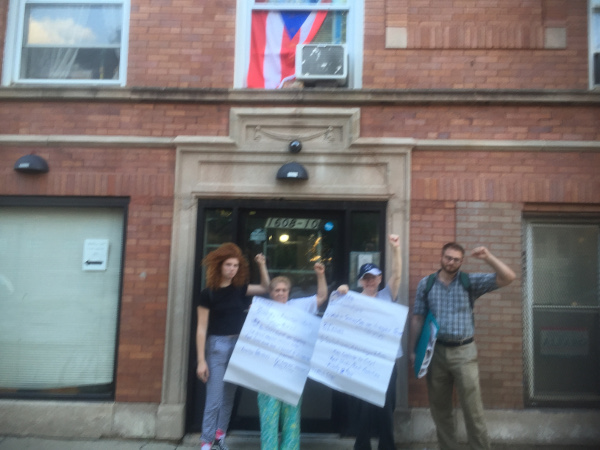 Organizers of a rent strike at a Chicago apartment building. Owners want to drive low-income tenants out and convert to high-rent apartments.
PHOTO/JOSEPH CARILLO

Other tenant concerns and requests are: holes in apartment floors; roach infestation through-out the building; rat infestation; strangers entering premises at all hours of the day; used syringes littered in the backyard area; no keys issued to tenants for rear building exit doors; abandoned ground floor unit being used by strangers; non-functioning smoke detectors; no smoke detectors; unattended garbage dumpster and garbage area; unattended building security; electrical short in senior tenant unit light-switch; exposed electrical wiring in exterior and interior of the building. All the tenant complaints and requests for repairs have been met with hollow promises. No true repairs are ever made.

The owners’ tactic is to allow the property to deteriorate until the low-income tenants eventually move out or their units can’t pass government inspection for Section Eight housing. This would allow Callero and Holloway to convert their building to high-income units.

On August 9, 2016, Paul Callero illegally dumped the contents of an evicted tenants’ unit into the alley behind Youth Service Project Inc., and Walgreens.  Alderman Roberto Maldonado was immediately notified of this illegal act. Despite notifying the alderman and the seriousness of the tenant’s deplorable living conditions, a check on the official website for the City of Chicago’s Department of Buildings shows no record of any inspectors at the 1606-10 N. Harding Avenue property in years, nor any record of any illegal dumping citations ever recorded.

On August 1, a rent-strike was called by Migdalia Torres, 69. “We Are Logan Square” organized Torres and other tenants of 1606-10 N. Harding, on how to legally stand-up for their tenant rights. As a direct result of this training, Brehon Capital LLC, Paul Callero and Scott Holloway, immediately negotiated with Torres in order to avoid legal tenant maneuvers that would cost them financially. On August 20, Brehon Capital LLC agreed to reimburse an unspecified amount of Torres’ previous rent payments made over the last year.

But nothing has changed for the remaining tenants. On September 9, a ceiling collapse severely injuring tenant, Carla Calicut, age 45, as she slept on her living room sofa.