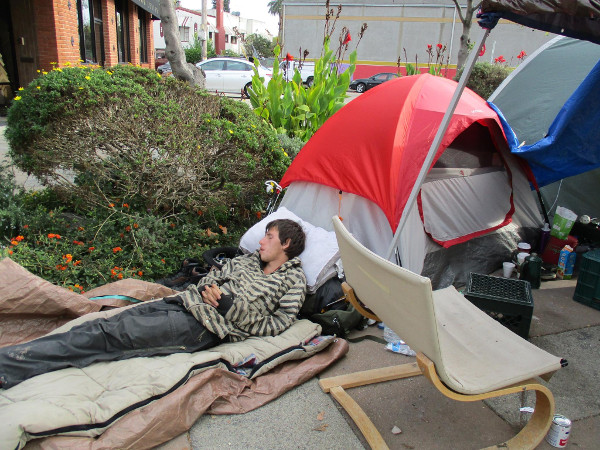 Dimitri rests from his overnight security shift at the Poor Tour. “First They Came For The Homeless” tent community in Berkeley CA.
PHOTO/SARAH MENEFEE

BERKELEY, CA — Recently, ‘First They Came for the Homeless’ was approached by Dan McMullen, Berkeley City Commissioner for the Disabled People’s Outdoor Project. Berkeley’s one-stop solution for homeless services, the HUB, was not working. Many agencies lost funding to fund the HUB. Those agencies are now finding it impossible to help people.

We organized an occupation. We brought tents to the HUB’s front door and occupied. In four days we witnessed horrible things. The worst was when a 55-year-old woman who couldn’t walk was sent away because she couldn’t prove her disability. Instead of letting her go back to the streets, we took her in. The HUB also does not allow homeless people to use their bathroom unless they have an appointment. Lack of bathrooms is a major issue, and again the HUB says no. Most of the people leaving the HUB were told no.

The person who runs the HUB ended up calling the police on the occupation. She complained about trash and human waste. Of course, none of it was true, but we are homeless, so we are automatically guilty. The cops raided on the fourth day. Cops, city workers, and city officials swept in at 5 A.M to remove us.

Instead of succeeding in crushing our protest, we quickly relocated to a predetermined location. Within a few hours, the occupation was piled in front of the office of the Downtown Berkeley Association (DBA.) We laid around for a day making a nuisance of ourselves. Then we moved to another location. We popped our tents in a median with very high traffic. Over the next few days, we grew in support and numbers. At this point a storm was coming. The severely disabled woman was still with us. An employee from the HUB came out to try to get her inside. A hotel voucher, which had been available the entire time, was offered and the woman accepted. She is now inside.

We lasted about a week before the city moved on us again. A major raid lasting over six hours and requiring dozens of city employees happened. They succeeded in moving us 200 feet. We had tents back up that night. They came the next day and we moved again. Now, we are back at the HUB, three times the size, with massive community support.

The City Council is now discussing a sanctioned tent city and people are looking into the HUB. We are going to stay here until things get resolved. We want tents for the homeless as well as tiny homes. Later today, I meet with council members. Stay tuned.

One thought on “Poor Tour of the homeless: We have a right to exist!”