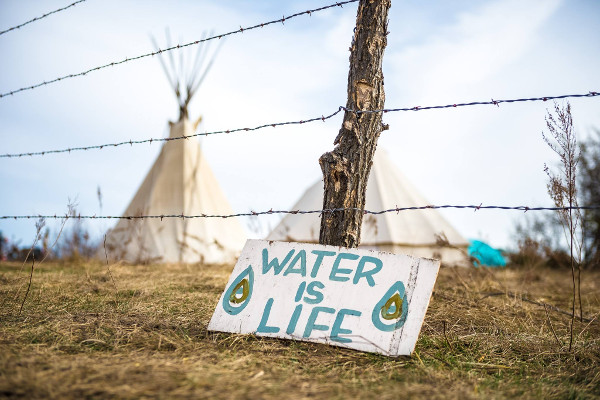 A scene from the Sacred Stone Camp, started in April to protect the Standing Rock Sioux’s water from the Dackota Access Pipeline, which threatens the water of over 17 million people downstream from contamination by fracked oil.
PHOTO/BRETT JELINEK

Cannon Ball, ND — “The last world war will be fought over water… You can’t eat or drink your money.”  — Kylo Prince, spiritual leader, Dakota and Ojibwe

Standing Rock has become a rallying cry for people to unite against the absolute sovereignty of corporate interests, representing the battle between the corporations and life itself. “What is happening here in North Dakota is like nothing I have ever seen in my life, anywhere in the world. This is a fight to protect and defend the water for 17 million people, for a livable planet, for Native and human rights, for peace, for justice,” said Water Protector Erin Schrode.

Struggles for Native American treaty rights, water rights, environmental safety, resistance to police terrorism, and other human rights all intersect in the battle against the Dakota Access Pipeline. “We are divided on so many fronts on so many battles, but when it comes down to the water, that’s where we can all stand together, because we all need it. It’s not an Indian thing anymore, it’s an everybody everything thing. That’s why it’s so important we’re all here together,” said Prince.

Not only have over 300 Indigenous nations from across the Americas gathered and planted their flags at Standing Rock—thousands from all over the country and the world have travelled to participate in this historic effort. Rhiannon Moon of the Standing Rock Lakota Nation remarked, “When people unite like this, it speak volumes… if stuff like this continues and people have the ability to see, we can make a difference.”

Steven Moon, Standing Rock Sioux, described what is at stake: “It’s good to talk about water. It’s also good to talk about the burial sites and the way that corporations can buy their way onto land and not pay the consequences for destroying somebody’s sacred burial sites. I can’t get away with going to a graveyard and kicking over a headstone and not think that I’m gonna get a vandalism charge… Our burial grounds, our sacred sites, some of them are thousands of years old. Those sites are now gone. He [gesturing at his six year-old son] can’t go walk on his relatives’ land to go witness something like that.”

When asked how he felt about the presence of all of the supporters, he said, “I for one welcome everybody. I’m happy. Look at them—they’re putting things together, they’re getting the word out.” Nearby, people were playing music around a fire, singing, “We have come to unify, protecting our water!”

Water Protector and Indigenous Life Network journalist Nirvana Anulekha, of the Muscogee Creek Nation, who had been arrested, remarked, “This seems like the start of an important shift… We need a beginning. If people don’t start caring, then our world is never gonna move in the direction that we’re supposed to move in… We just want a better world to live in, with clean water.”