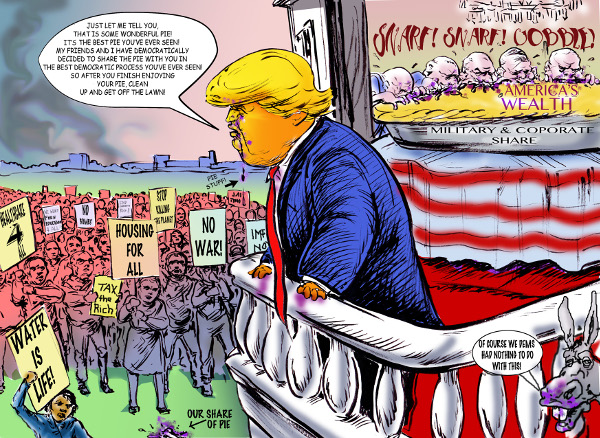 Society is going through epochal changes. We live in a time of revolutionary transition from an economy based on securing a living through working for wages to one based on robotics, which makes human labor unnecessary. This new technology creates an abundance of everything we need to survive and thrive without the back-breaking toil of yesteryear. But because this technology is owned by a tiny corporate class which has accumulated unheard-of wealth while “we the people” fall into an abyss of poverty and despair, the American Dream we once aspired to has for millions become a hellish nightmare. Workers who are displaced by robotics, and those who are threatened, are in a fight for our lives against a corporate class which is moving rapidly to do away with any democracy left and impose a police state to resolve the crisis in their favor.

They are demanding that we give up any rights to the social wealth we have created over generations in order to save the system of corporate private property. They want us to give up public education, healthcare, housing, parks and forests, clean air, clean, affordable water, energy, pensions, and social security, which they want to turn into private property assets for themselves.

But the people are not going quietly into the abyss. There is a great groundswell of resistance! Millions marched against the hateful rhetoric and executive orders of Trump, in defense of women, immigrants and Muslims, for science, the Earth and for a future where our children can thrive. More marches are planned.

As the people resist the in-your-face assaults of the Trump gang, let us not forget the struggles against police killings from Anaheim to Albuquerque, Chicago to Ferguson; against the wanton corporate/government disregard of the peoples of Standing Rock and others in the paths of destructive tar sands oil and fracked gas pipelines; against the effort to privatize water which led to the poisoning of Flint and exorbitant rates and shut-offs in Detroit and Highland Park, MI; and the struggles of our falsely imprisoned leaders such as Rev. Edward Pinkney, who stood up for the people of Benton Harbor, MI against the tyrannical Whirlpool Corporation and the Emergency Manager laws that turn our land and other public assets over to the corporations. All these struggles preceded Trump under both political parties.

These times call for big solutions to big problems. We can’t wage this fight without hope. We can’t win without a vision and without unity. The times demand a political movement unified around the fight for the people’s basic needs—for clean affordable water, housing, healthcare, education, and the end to oppressive police. We must demand of every politician that the needs of the people be met. These struggles for human rights must be made inside as well as outside the Democratic Party. The fight for basic needs will likely give rise to a new political party that will seek to lead the struggle. The people must push that party to fight for a new society—where the abundance produced by the new technology can be distributed according to the needs of “we the people” and not for the profits of the corporations.