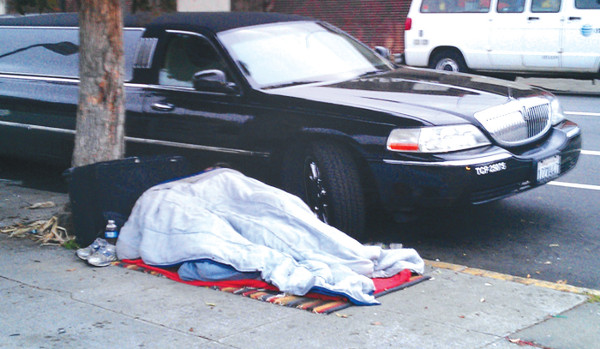 Homeless in San Francisco with a Limo parked nearby. The article on this page points out that community is about sharing and taking care of one another.
PHOTO/SHANI HECKMAN

In the Peace Corps, I lived for two years in an ancient village of the Mbukushu people. Traditional Mbukushu housing compounds feature one- or two-room houses and shared kitchens and toilets. Nuclear families share small courtyards, and a ring of nuclear families surrounds the extended family’s greater courtyard. The entire compound is surrounded by a reed fence. The fence’s gates are never locked. Culture, not force, produces order.

The government housing projects tend to isolate people. They inhibit the formation of community by assigning roommates randomly and organizing the entire population under a hierarchy led by bureaucrats. This order produces a culture, but it is not a culture conducive to the development of independence, cooperation, or initiative.

The government coerces people into their programs by refusing to dignify life on the streets with any measure of legal standing. They claim that their programs are voluntary while “service resistant” homeless are routinely harassed by the police and dispossessed of their survival gear. This constitutes coercion. Government shelters, in their present form, can never be homes and barely qualify as shelter: in fact, they more closely resemble prisons.

Mbukushu compounds are usually shared by families, but the model can be adapted to serve intentional communities. By recognizing multiple respected leaders, but not a single master, and by sharing resources to maximize their utility, we can liberate and uplift people simultaneously. By giving people the freedom to take charge of their lives, we can cure them of dependence and produce true empowerment. But only a community can do this, not a bureaucracy.

I’ve seen what a community can be, and First They Came For The Homeless is as fine a community as has ever existed. It is ruled by consensus democracy, not bureaucratic hierarchy. It keeps order by culture, not force. It creates prosperity by granting freedom, security and prosperity through mutual aid and support, practicing a new lifestyle which is, in reality, the oldest lifestyle on Earth. Local governments resist it for two reasons: firstly, it disrupts established orders; and secondly, the inability to produce radical solutions is a job requirement for these politicians, imposed upon them by their masters, the real estate developers.

Adam Black is a homeless resident of the ‘First they came for the homeless’ intentional tent community/action, the Poor Tour, in Berkeley CA