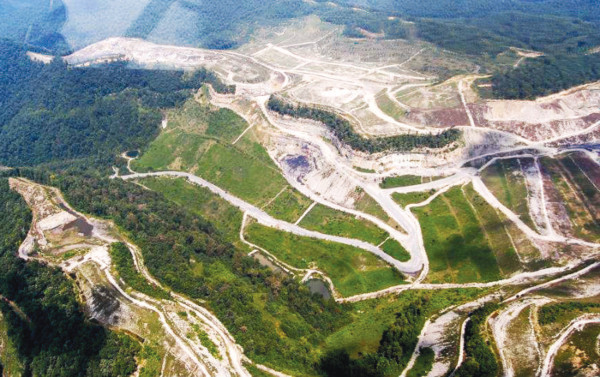 Activists fighting mountaintop removal (where coal companies blow up mountains, severely damaging the land, air, water, and health of the people in nearby communities where cancer rates are rising), are calling out the Bloomberg-backed coal film.
PHOTO/MARIA GUNNOE, COURTESY OF SOUTHWINGS.ORG

Editor’s note: Below we print excerpts from a news release we received.

The film presents the history and future of the U.S. coal industry, interviewing coal mining families, leaders of Big Green environmental groups, and other experts.

Environmental activists object to the way the film purports to be concerned about coal miners and mining communities, while exploiting their plight to advance an undisclosed agenda of boosting the fracked gas industry, which because of massive methane emissions, water contamination, and other problems, is every bit as damaging to the environment and public health as coal.

Bloomberg and his allies have been vociferous in their support for expanding natural gas and fracking as a “bridge fuel” to more sustainable energy. But fracked gas extraction and infrastructure will enrich elite investors at the expense of the environment.

Activists in the fights against mountaintop removal and expansion of fracking are calling out the film, Michael Bloomberg, and Carl Pope. Some excerpts from those statements follow below.

“After watching this film, I was infuriated.  The Sierra Club did not end mountaintop removal. Bloomberg’s money for Sierra’s efforts to end coal has led to the current fracking boom and natural gas pipelines destroying what’s left of Appalachia.  ‘Beyond Coal’ represents the money in the Sierra Club from the natural gas industry, from Chesapeake to Bloomberg. It has done nothing good for the people living here.”

Statement of Maria Gunnoe, an Appalachian activist who won the prestigious Goldman Prize for opposing mountaintop removal in her community:

“I have fought the impacts of the coal in industry in Boone County, West Virginia all my adult life.  I was born and raised here. Mike Bloomberg and Carl Pope couldn’t handle living like we do for a day, and they wouldn’t know coal if they tripped over it. While he was executive director of the Sierra Club, Carl Pope accepted $26 million from Chesapeake Energy to kill one fossil fuel, coal, to benefit natural gas fracking and pipelines. Then, Mike Bloomberg gave Sierra Club $80 million to shut down coal-fired power plants, with no consideration for how it left the coal miners and the people of Appalachia.  There was no plan for them in Beyond Coal. Don’t let them fool you. These organizations owe Appalachia, too; they are morally responsible for its demise.  Exploiting already exploited people for money is wrong.

“These elitist organizations are selling off the coal communities of Appalachia for their own salaries and for profit.

“The family in your film are my neighbors. You used them for ‘From the Ashes,’ which is nothing more than a vanity piece for elitists in New York City or San Francisco who think they know what’s best for us hillbillies.  Well I have news for all of them, you can’t own hillbillies.”