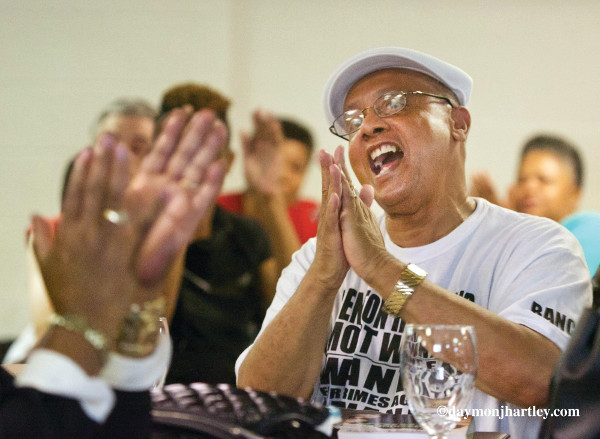 Rev. Edward Pinkney of Benton Harbor, MI, was imprisoned twice, persecuted by the corporations and government for his uncompromising stance for the people, democracy and against corporate power. Here he celebrates his welcome home (from prison) party with supporters.
PHOTO/DAYMONJHARTLEY.COM

BENTON HARBOR, MI —While I feel very good that there has been a quick response by some to denounce the intimidating, harassing, threatening, violent behavior of the White Supremacists and neo-Nazi’s, I am challenged that many of my fellow Americans are not surprised by the actions of this country’s leadership and the growth of racist, anti-Semitic marchers.

Under the guise of preserving white culture and supporting confederate monuments, most of which were erected in the Jim Crow era in an attempt to symbolize white supremacy, Charlottesville, 2017, shined no different light than Birmingham, 1963. Some people mistakenly believe that all of the necessary work on race was accomplished by Abraham Lincoln and the Civil War, which aided the end of slavery. I do not have the luxury to turn off my television and do nothing. I see that Charlottesville, Virginia, showed us unequivocally that confederate statues, confederate monuments, and symbols offer pre-existing acts of racism.

We must take advantage of this shameful display of White Supremacism at its best in Charlottesville, Virginia. We must start to organize and mobilize the country, city-by-city, county-by-county, state-by-state. We must educate and confront the White Supremacists.

The White Supremacists will go to any length to silence anyone who resists their criminal behavior, generation mind games, and racist bull.

While we cannot hide from our history of slavery, the torturing of Blacks and the continuing torture of Blacks today, the time has come to make clear the difference between properly acknowledging our past and glorifying the darkest chapter of America history of slavery and it must end.

I personally found that when opportunities were measured, including education levels and poverty, Michigan, Mississippi, and Wisconsin were three states at the bottom for providing opportunities for Blacks.

The Charlottesville, Virginia incident has given the good people of this country opportunities to organize and mobilize together to confront the White Supremacists.