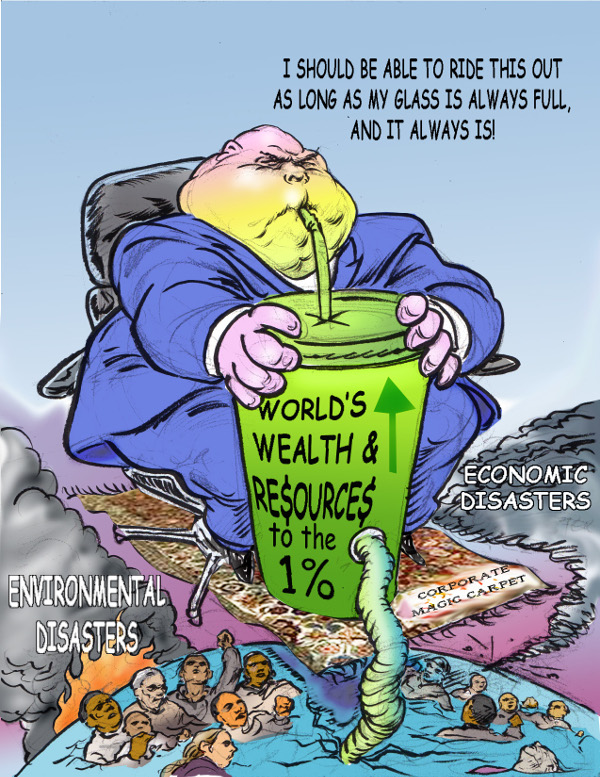 In times of crisis and disasters, we, the people, want to help each other. But the disasters we are facing are so huge they require the government to mobilize society’s resources to help, and we and the Earth are being abandoned by government. The corporate-controlled government is focused on taking care of the corporations and the billionaires.

We’ve been hit by one disaster after another, both natural and man-made. The recent California wildfires (possibly caused by Pacific Gas and Electric Company’s negligence) wiped out whole communities, leaving thousands displaced or homeless, and many others dead or missing. Massive smoke clouds will cause respiratory health issues and possible premature deaths far into the future. And a “public-private” partnership, led by business interests who stand to profit, has already been formed to develop a “recovery” plan.

The hurricanes that ripped Texas, Louisiana, Florida, Alabama, Georgia, the Virgin Islands and Puerto Rico add to the misery. The situation in Puerto Rico is especially grave. People are dying for lack of electricity, food, clean water and healthcare. The destruction of homes, bridges, roads, dams, businesses and crops will result in more homelessness, unemployment, poverty and higher prices at the grocery store. These are problems only government can solve.

Yet while Puerto Ricans are dying, President Trump chided the Puerto Rican people for being in default to Wall Street, as if to excuse his slowness in responding, and he even kept Cuba from rendering help early on. Instead of mobilizing aid, he and Congress shifted their attention to tax cuts for the rich, defunding Obamacare, and stepping up the attack on immigrants. With regard to healthcare, rather than guaranteeing it for everyone, the government is focused on further privatizing healthcare to keep it a profit-making capitalist venture instead of actually healing the sick. Their plan will leave millions of the poorest Americans without coverage. Further, they divert more of the budget to the military and saber rattle for war around the world. To add insult to injury, the planned corporate tax cuts will mean that with each new disaster there will be less money for aid. And we can add to the list of catastrophes the economic disaster we are all facing, with rising poverty and homelessness, falling wages and disappearing jobs.

Trump is a serious problem, but he is just a symptom of the disease. The disease is an economic system that is dying because technology is replacing human labor. If we can’t be employed to turn a profit for the corporations, they have no use for us. Our interests and the interests of the capitalist billionaires and their government are completely opposed. We can no longer coexist with a system where the means to produce what we need to live is privately owned, a system driven by profits, that denies life-sustaining resources like water, homes and healthcare to us if we can’t pay. The people must take over the corporations before they destroy the Earth and humanity, and the government must be our government. We are at a crucial moment in American history. Either we continue dying in an America of, for and by a tiny class of billionaires, or we build an America that is truly of, for and by the people.

HUD is no longer in the housing business, but corporate billionaires are

Society could provide for everyone. Why isn’t it?