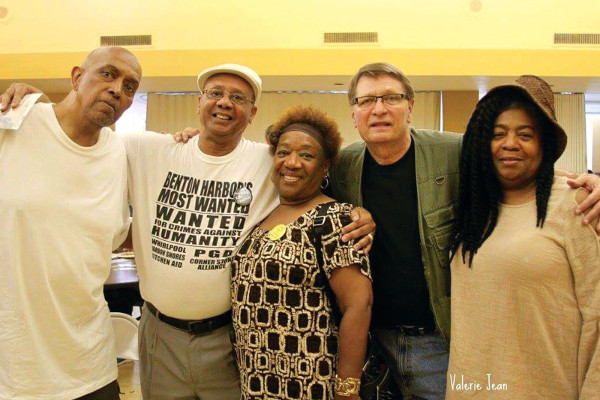 Celebration of Rev. Edward Pinkney’s release from prison (second from Left) after serving time for taking on the corporate dictatorship led by Whirlpool, in Benton Harbor MI.
PHOTO/VALERIE JEAN

BENTON HARBOR, MI — I, Rev. Edward Pinkney am going to the Michigan Supreme Court in Lansing, MI on November 7 to enforce the Constitution. The Michigan Supreme Court is taking up my case. I served 30 months in prison for a crime I didn’t commit. The Court is looking at whether a law used to charge me with forgery of election documents is a crime or just a penalty. The Berrien County Court ruled that it was a crime and a penalty, but it cannot be both. It has to be one or the other. The issue is whether the courts will be able to use the power of the Constitution to their advantage and change the meaning of a law.

The statutory or contractual language in the law must be enforced according to its plain meaning and cannot be judicially revised or amended to harmonize with the prevailing policy of the Berrien County courts. The constitution forbids this.

Any judicial revision or amendment of the plain language of a law involves a court impermissibly legislating from the bench and the law does not allow it. The judicial, the judges, must function within its constitutional responsibility to act in accordance with the constitution and its system of separate powers, by exercising only the judicial power. If the legislature wishes to provide that forgery of additional election code documents can be prosecuted, it must provide for this with the plain language in a statute. Doing otherwise is the role of the legislature and not the role of Berrien county Courts.

Let the truth be told. The structure of the election code must be read in a manner with each of these penalty provisions, applying only when some other section of the code proscribes forgery, perjury or other crimes.

Any claim that MCL 168.937 creates substantive crimes, based on forgery of any and all election related documents by any person renders other sections of the election code that prohibit forgery as surplus, contrary to Michigan law. I have stated for many years that MCL 168.937 was a penalty not a crime.

The Supreme Court hearing is an opportunity to get this injustice right. The all-white hand picked jury of Gail Freehling, Jill Olsen, David Dill, Catherine Roamer, (Judge Sterling Schrock’s friend,) and Carolyn Davis, Carlia Witz, Allen Prysky, Scott Rose, and four others, all got it wrong. We must confront injustice with truth and speak truth to power. The judge, prosecutor, and jury should be tried for crimes against humanity.