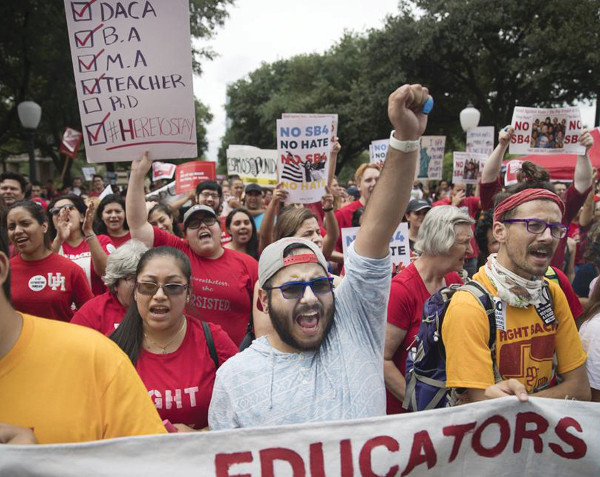 Protesters gather at the state capitol in Austin, Texas in June to protest the anti-immigrant Senate Bill 4.
PHOTO/RICARDO B. BRAZZIELL, AMERICAN-STATESMAN

WESLACO, TEXAS — Over 700 people gathered at Our Lady of Guadalupe Catholic Church in Mission on August 12. They marched along the Rio Grande River Texas/Mexico border to protest the continued efforts of the Trump administration to build a wall that will divide two countries and their people. It is a 28-mile wall mainly in Hidalgo County in Texas. It will affect not only the community but local farmers who live and work the land along the river. It will also impact the wild life areas in its path.

The protesters marched four miles from the church to the famous La Lomita Chapel founded by Obalate Missionaries in the 1800s. Present were representatives of the Native American people, Carrizo/Comecrudo Nation, Sierra Club, North American Butterfly Association, Center for Biological Diversity, UFW, Fuerza del Valle, South Texas Resistance Movement, plus others. At the head of the march was the local priest, Father Roy Snipes.

After the walk, marchers gathered at the La Lomita Chapel grounds where they listened to speakers who all spoke about the damaging effects of the wall. Another demonstration continued on Sunday at the Santa Ana Wildlife Refuge on the political, economic and human effects. There was agreement among all that the wall must not be built. And all committed themselves to continue the struggle against the building of the Wall and for repeal of Texas’s anti-immigrant “show me your papers” law, SB-4, that tries to stop cities from providing sanctuary to immigrants.

Local and state police departments are implementing SB-4 by calling immigration/ICE, even though the law is still being challenged over whether it is constitutional. Therefore, the saying here in the valley is that there is no democracy in Texas. Everyone is subject to being interrogated by the police and ICE under this law.

In addition, the Trump administration has started filing charges for endangering the lives of minors against parents who arranged for their children to be brought to the United States. All the parents wanted was for their children to get away from the violence, rape and drugs. Now they are prosecuted for wanting a better life for their families.

Clearly, we can see that our government does not represent the interests of the poor people. We are witnessing a growing fascist movement here in Texas. The need for cheap labor is coming to an end. Why? Because technology is slowly replacing human labor. The ruling class of this country has no need for us, and that’s why they want us divided by color or race. The thing they are afraid of is the unity of the poor people. It’s our only chance for the survival of the human race. The future is in our hands.