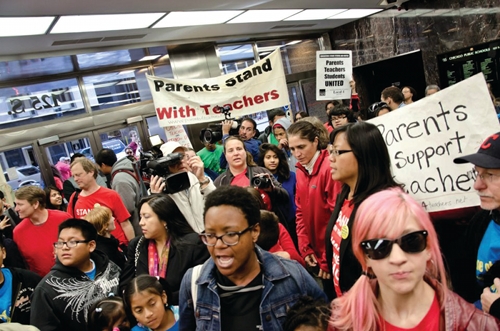 CHICAGO, IL — “What is Disgusting? Union Busting!” That is the slogan I heard so many years ago during the 2004 strike in the City Colleges of Chicago. At the time, we were up against a corrupt mayor and a growing anti-union sentiment. The right to collective bargaining is crucial if public sector workers are to survive. Unfortunately, anti-unionism has since devastated Wisconsin, Michigan, and Indiana. But now a greater threat comes from Illinois.

If the Supreme Courts rules in its favor, the Mark Janus vs. AFSCME case promises to give public sector unions nationwide a decisive blow. Framed as a right to free-speech and claiming that unions don’t represent or speak for him, Mark Janus wants the right for all workers not to pay fair-share dues. In Illinois and across the country, that would devastate public sector unions.

Janus is supported by the National Right to Work Foundation and the Liberty Justice Center and billionaires like Illinois governor Bruce Rauner. These entities fight for corporate interests, not the working class, not for your interests. Ironically, Janus argues that AFSCME has backed politicians who have ruined the state’s budget, when the root cause has been corrupt politicians who have not paid state bills, most recently Rauner who has been holding the state budget hostage.

The workers who refuse to join the union and are fair-share are also represented by the union. They are guaranteed benefits and protection under the collective bargaining agreement, but unions do far more than negotiate contracts. They also advocate for fair working conditions like academic freedom. Unions fight for healthcare benefits that are so necessary in an increasingly difficult economy. The City Colleges Teachers Union has historically awarded scholarships to students, both documented and undocumented because of our union dues.

The Supreme Court is scheduled to decide the Janus Case by the summer, 2018. In the current political regime, unions will not win this case. However, unions can get organized. Some public-sector unions are already working very hard to re-card all of their members.

Recently, Karen Lewis, president of the Chicago Teachers Union, spoke about the threat this case posed for public sector unions. She agreed that attacks on fair-share dues would devastate unions. She also said something quite profound that may offer a light at the end of the tunnel. She said when labor organized, historically, it made a big mistake in not lifting everyone else with it. Perhaps, it is time that unions consider how to fight not just for their members’ rights and benefits, but for the rights and benefits of others in the community. I hope we can get there without having our unions decimated.

I have worked in right-to-work states like Arizona, and the conditions there were dismal. Health benefits were a privilege, and there was little to no recourse if there was a dispute with management. I was at the mercy of unfair bosses. This is the future we can expect if the Supreme Court rules in favor of Janus.

One thing is for sure, we are all better off with a union that is stably funded, and, as Karen Lewis said, fights for all workers.

One thought on “Billionaires vs the right of unions: What’s at stake in the Janus vs. AFSCME case?”