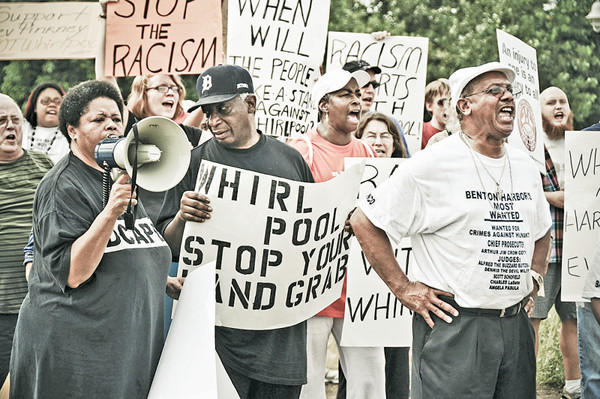 Rev. Pinkney (right) protesting in 2010 against the redevelopment of Benton Harbor, MI, which is creating more homeless and poverty.
PHOTO/BRETT JELINEK, OLAFIMAGES.COM

Whirlpool ordered the elected officials of Benton Harbor and Benton Harbor law enforcement to pass and enforce all the city ordinances concerning the homeless. The job of the police is to arrest, intimidate, and harass all homeless individuals. The homeless are not even allowed to sit in the library to get warm.

Do you know that Whirlpool, the largest corporation in the area, made over $20 billion in total revenue in the year 2016, and in 2010, forced $3.87 million in tax breaks from the city of Benton Harbor, one of the poorest cities in the country?

Whirlpool secured the renewal of lucrative energy tax credits for making high-efficiency appliances that were worth a combined $120 million for the years 2012 and 2013. Such breaks have helped the Whirlpool Corporation to keep its total tax expenses below zero in recent years.

We have homeless people in Benton Harbor trying to stay warm, without food and clothing – and the people have remained silent. We must stand up to Whirlpool. It is about tax policies, about benefiting the political class, the well-connected and the well-heeled. That is who the rich are thinking about in this country.

Benton Harbor has less than 10,000 people living in the city and hundreds and hundreds of homeless people (with many living with their mama and kids.) We have young people, old people, children, mothers, and fathers who are homeless—and we are giving $3.87 million in tax breaks to Whirlpool, the poverty pimp. Shame on you!