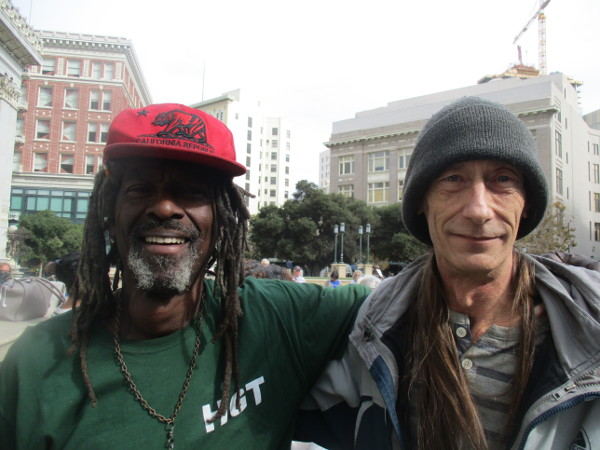 Homeless movement leaders Nino Parker (left) and Mike Zint (right) at the Oakland, CA press conference on the release of the UN Report on Homelessness in the U.S., which condemned Bay Area cities treatment as “brutal.” Mike met with the UN Rapporteur and spoke at the press conference.
PHOTO/SARAH MENEFEE

BERKELEY CA —Goodbye summer, hello rain and cold. This coming winter is forecast to be a bad one by The Farmer’s Almanac. For most, this is not a big deal. For the homeless, it can be lethal. On the streets of Berkeley, there are dozens of seniors and seriously disabled, with nowhere to go to escape the weather.

During 17 raids over the three-month ‘First they came for the homeless’ Poor Tour, we tried to expose what happens to people who are on the streets. Feces, needles, and trash accumulation were always the reasons given for police action. They usually showed up around 5 am. Not one member of the protest ever saw human feces, our diabetics had sharps containers for needle disposal, and trash was never allowed to accumulate. But the city said so, and that allows for raids, destruction of property, violation of the Constitution, and violation of the UN’s declaration on human rights. Health and safety concerns are always the reason given. Not once during the protest were the homeless considered to be victims of health and safety concerns. Just the cause

It’s hard to get the public to understand homelessness. As far as who the homeless are, they are just like every housed person. Except their issues don’t get hidden behind walls. The world can see the drug use, the drinking, and the mental state. What’s hidden is the torture of being homeless, and how escaping on drugs or into insanity is often the result. Constant exposure to the weather. Police waking you up. Police stealing everything you own. People giving you bad looks, or yelling get a job, or quickly looking away, or giving you a wide berth on the sidewalk only add to the systemic torture. Criminalizing survival makes you a prisoner to nonexistent services.

Today, we have dozens of people stable in tents. We have had hundreds come through camp. We provided stability, storage, privacy, personal space, and community. And they fixed their own lives. They got jobs, saved money, and improved their situation. After Friends of Adeline paid for the south Berkeley porta potty for months, the city started paying. How much is that for hundreds helped? The city not being prepared for the winter shelter closing right before winter is telling. Making a big deal out of putting back the lockers they removed a few years ago is telling. No affordable housing is telling. Not sanctioning a responsibly run, community-based tent city is telling. All these things tell me that only the richest count. There will be no solution as long as profit is more important than people