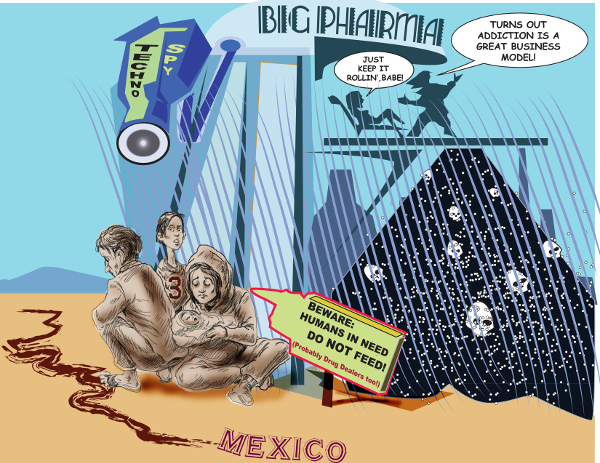 Listening to the words coming out of the White House, we have a real emergency on our hands. Rapists, drug lords, and criminal masterminds are threatening the livelihoods of America’s working class. But the offenders who most threaten Americans are not crossing the border as refugees and economic migrants—they are the billionaires who run giant corporations, control governments, and dominate the global economy.

The billionaire Trump is pushing fascist propaganda, the dangerous lie that everything bad in America is because of immigrants, in order to declare a national emergency. This is a flat-out fascist power grab, flaunting the democratic process and endangering the lives of immigrants, marking another step toward the billionaires imposing a full-blown dictatorship on the whole country.

The threat of the boogeyman “criminal immigrant” is created to distract us. We are supposed to believe Trump cares about keeping out rapists, when he himself has been accused of sexual assault over a dozen times and still has not been held accountable. And a wall supposed to keep drugs out, when some of the deadliest drugs come from pharmaceutical companies within our own borders; the Sackler family makes billions of dollars off oxycontin sales and the opioid epidemic, which claims tens of thousands of lives every year. Of course, most people with real power are able to keep out of the criminal justice system, but even still it’s alarming the number of corporate, financial, and political elites that cycle from public office then through criminal courts with a slap on the wrist, then on to private enterprise, then back into office; a revolving door of corruption.

How is it that the ruling elites are able to so effectively monger anti-immigrant fears, when clearly they are the ones we need to truly fear? Study after study shows that immigrant communities are safer and experience less crime, on average, than communities with few immigrants. CEOs automating their workforce as well as moving their operations overseas have robbed people of more jobs in the U.S. than a fictional “invasion” (immigration rates are down in recent years). If there is a national emergency that our country faces, it is that billionaires are actively destroying our society and the environment. They are scapegoating immigrants to impose fascism upon us all.

The billionaires ignore the real dangers people face—they don’t value our lives, and they don’t want us to value our own lives either. They promote and enable violence in our country, and they ignore the widespread hunger, lack of healthcare, and homelessness. This is a culture of fascism, born and bred in this country.

The existential threat we face is not caused by anyone from outside of this country. It’s those at the top, the billionaires and the politicians they control, who sow division among the working class and watch as we kill ourselves with the guns they sell us, poison ourselves with the drugs they push on us, and freeze to death while millions of homes stand empty.

There is a moral outrage building, based on the goodness of people who simply want to live and let live, who can’t stand to see the way their fellow human beings are treated in a system run by billionaires. We unite with and defend immigrants as a way of defending us all. It’s the right thing to do. As the great poet June Jordan wrote, “We are the one’s we’ve been waiting for.” We are the ones who can, and will, remake this mess into the world we need and deserve. We are in motion, and as we build momentum, no billionaire will be able to stop us.