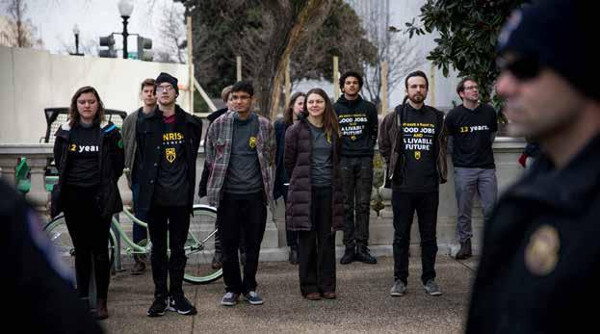 Allie Lindstrom [far left] was arrested in December, 2018 with 142 members of the Sunrise Movement where 1,000 youths gathered on Capitol Hill to garner Congressional support for a Green New Deal.
PHOTO/SUNRISE MOVEMENT

ANN ARBOR, MI – I grew up in Ann Arbor, Michigan, where climate change was never up for debate in my school system. Instead, I learned about the greenhouse gas effect, biodiversity loss, and that I should put up a solar panel. I remember being terrified in the classroom. The next steps were simply to study. At Washington University in St. Louis, it’s the same in more detail: issue focused; solutions, an afterthought. The doom is looming, but the urgency is lacking. Why?

I didn’t consider whether my home would be there when I returned, or if it’d weather any storms, until this past semester when I joined the Sunrise Movement in D.C. with a thousand others to demand a Green New Deal (GND), a package of policies including 100% renewable energy by 2030, a federal jobs guarantee, and investment in communities on the frontlines of poverty and pollution. Led by unapologetic youth, I took an arrest with 142 others and hoped it would sway Democratic leadership.

When we stood in the halls of Congress, telling our stories and singing, I thought this could actually work. Not, “This protest could get some media. That’ll help.” The GND could actually solve climate change. It doesn’t start from an assumption of what’s politically possible. It springs from identifying what’s needed.

While I sat in zip-ties, the ways in which Michigan will face the climate crisis washed over me. It might not be as dramatic as a hurricane, but our access to clean water (already threatened by oil spills, lead, dioxane, and PFAS), our crumbling infrastructure, agriculture, and industry are all facing uncertain futures. I began to see the changes in my home state for what they are. The climate crisis requires us to give everything we’ve got. The Sunrise Movement gives me real hope.

The GND is a powerful proposal, not only because of its scope (we’ll have to transform our economy to stop the climate crisis) but because of all the people it folds into the movement. I’m bringing the fight back to Ann Arbor because I can see how a GND could impact my home. By taking concrete issues Americans face (crumbling roads, heat waves, high electricity bills) and directly connecting them to changes such as guaranteed green jobs, the risks of climate change and the benefits of acting become tangible. The GND engages more voters than other proposals because there’s room for everyone.

That’s why I, and hundreds of others, are starting Sunrise hubs in our communities. It’s time to fill our politics with daring hope, even if we’re called young and naïve. As we stood in the hallways of Congress, we sang: “There is a crack in everything. That’s how the light gets in.” I showed up to D.C. nearly burned out and left full of determination.

If we don’t have skin in the game, and we don’t have hope, how can we make change? It’s time to expose the climate crisis for what it is, so we can rebuild a world that works for all of us. We must tell our stories, even if they seem small, to begin to take transformative action.