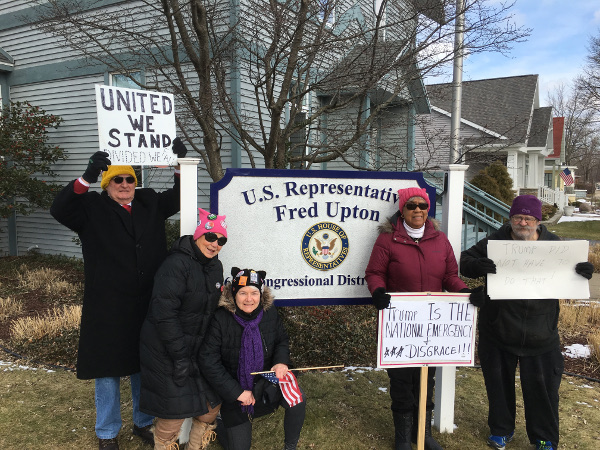 One of the weekly protests outside Congressman Fred Upton’s office in St. Joseph, MI. Protesters address issues such as water, healthcare, and housing.
PHOTO/R. DIBBLE

When demonstrations occurred across the country before the inauguration of the new president in January 2017, demonstrators continued weekly actions every Tuesday at 12 Noon in front of Congressman Fred Upton‘s Michigan 6th District Representative Office in Saint Joseph, MI.

Now, for over two years straight these continuous weekly demonstrations are attracting 1-2 dozen citizens with evolving concerns over local issues, events in Washington and nationwide politics. These people have a wide range of different points of view but agree to work together in solidarity with each other on pocket book and moral issues, such as water, healthcare, housing, immigration, education and voting rights. They demand that Congressman Upton hear their collective voice and represent their concerns.

Fred Upton has for over 30 years been representing large industry, energy sector and worldwide appliance producer Whirlpool in Congress.

These demonstrators are reluctant to be identified with any particular organization and encourage anybody and everybody who has concerns of which they want the Congressman to respond to join them every Tuesday at noon at Congressman Fred Upton’s 6th District Office, at 720 Main Street, St. Joseph, MI, 49085.

Everyone nation wide with common interests are encouraged to put aside their differences and work together and not wait for someone else to organize events like this.