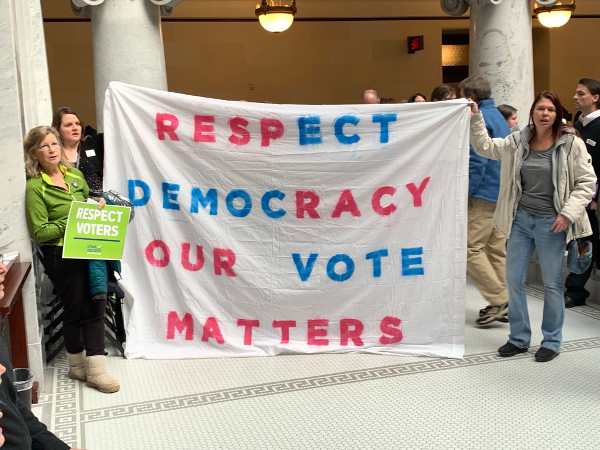 Demonstrators at the Utah capitol fight to protect the health care law that voters passed in the elections to expand Medicaid to those in need. Lawmakers defied the voters’ will, passing a new bill that restricts coverage for tens of thousands.
PHOTO/PROP 3: UTAH DECIDES

Editor’s note: Utah voters, morally opposed to people in need going without healthcare, passed Prop 3 to expand Medicaid. Lawmakers overturned the legislation, voting for a new bill that eliminates coverage for tens of thousands. The following quotes express the outrage of Utahans.

“This vote is a shocking display of disrespect for Utah voters. This bill eliminates coverage for tens-of-thousands of Utahns in need and leaves billions of our tax dollars in Washington. This is not what we voted for.”
— Andrew Roberts, spokesperson for Utah Decides Healthcare

“The Utah legislature’s disregard of the decision of Utah voters is an affront to the principles of American democracy. Fifty-three percent of Utah voters chose to implement Prop 3, full Medicaid expansion. That’s 59% of legislative districts, with an amazing 75% voter turnout. When legislators suggest voters didn’t understand what they were choosing they insult their constituents’ intelligence and moral courage. I hope voters will remember in 2020 who represented them and who didn’t.”
— Paul Gibbs said he would have died had it not been for Medicaid and Medicare. He became an activist because he wanted everyone to be entitled to life.

“Our rulers don’t want any upstarts thinking they can vote and get away with it. They all have elections coming up. … Vote them out! — Facebook discussion