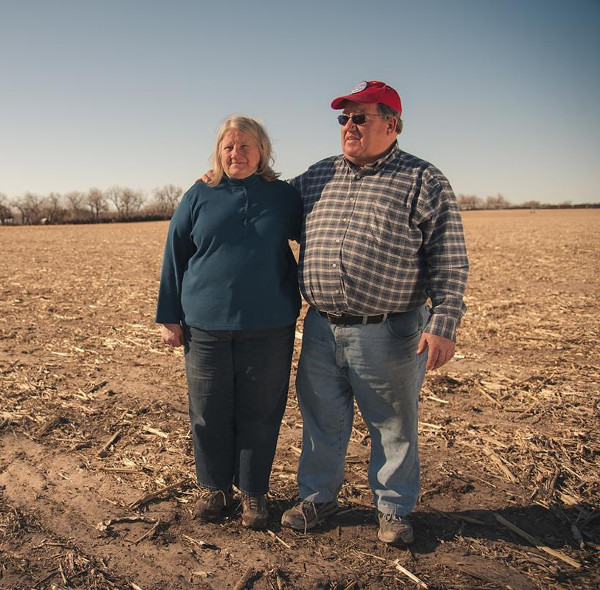 Art and Helen Tanderup, Nebraska landowners who are fighting the KXL Pipeline.
PHOTO/DONATED

NELIGH, NE — On March 29th, water protectors gathered at the Rosebud Sioux Tribe Spirit Camp near Ideal, SD. They gathered on that beautiful hill to celebrate the fifth anniversary of the founding of the camp, and to show continued resistance to the Keystone XL pipeline.

Many miles away, the leader of the United States withdrew the 2017 KXL permit. Immediately afterwards he issued a new cross border permit. That permit would allow KXL to enter the United States from Canada and proceed approximately 1.2 miles to the first shut off valve.

On April 10 President Trump issued two more executive proclamations. The first was “to avoid duplicative and redundant studies and reviews.” The new presidential permit appears to circumvent restrictioBy Reverend Monica M. Villarrealns under the National Environmental Policy Act and other laws, because the statutes apply to executive-branch agencies, but not to the president. It specifically targets Section 401 of the Clean Water Act. The goal is to deny tribes and states local control on Water Quality Certification.

The second executive proclamation states that cross border infrastructure project permit decisions “shall be made solely by the President.” Why was this done? A Great Falls, Montana, federal court halted construction of the KXL Pipeline when Judge Brian Morris issued an injunction until further environmental review of the U.S. State Department’s Presidential Permit. That ruling has been appealed to the 9th Circuit. Fearing a defeat in the 9th Circuit, the administration hopes to fast track the project.

Our country was founded on a checks and balances philosophy. This guarantees that one branch of government cannot dictate.

What has happened here is clear abuse of presidential power. The profits of a foreign corporation trump the will of the American people and the laws of the United States.

Congress provides jurisdiction over the Bureau of Land Management lands (BLM). The BLM has not granted a permit. The U.S. Army Corp of Engineers has not granted permits for the pipeline crossing the Missouri, Yellowstone, Cheyenne and Platte rivers as well as their tributaries. Attorneys for the tribes, the environmental groups and the landowners continue to challenge the abuse of presidential power and the law.

Meanwhile along the route, TransCanada continues to push forward with actions not defined as “pre-construction” by the Montana court. On the ground and “in the air” surveyors have been out working the route. Landowners in Nebraska who have not signed easements, recently received letters threatening them with eminent domain if they did not sign easements by April 2. The Nebraska route is currently in the courts, so TransCanada has no power of eminent domain.

This foreign corporation has also sent letters to local banks seeking “subordination” agreements. This allows TransCanada to collect if there is a problem with a subcontractor. The landowner faces a potential lien on their bank note and mortgage. This scenario recently happened in Meade County, SD.

TransCanada is not new to this bullying behavior; they have been issuing false and misleading claims for almost a decade now.

The water protectors continue to pray as they vow to never allow this “black snake” to be built.