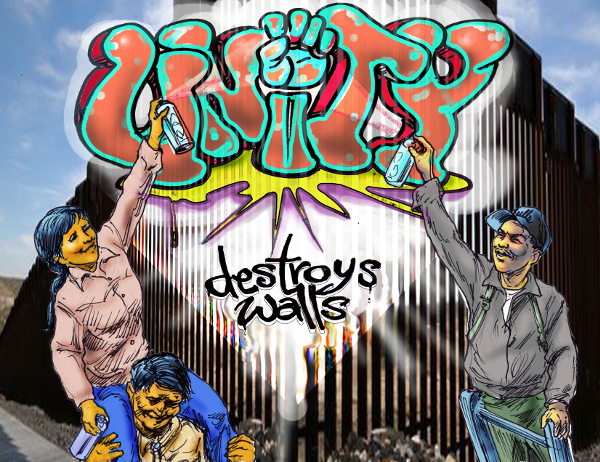 American and Mexican artists are painting a mile-long mural on the U.S.-Mexico border fence celebrating peace and unity.
CARTOON/ANDY WILLIS

In mid-April, Laura Maradiaga-Alvarado, an 11-year-old girl now in Houston, received a deportation order terrorizing her and her family. Laura faced deportation back to El Salvador, a country that she had fled with her mother and sister for fear of their lives. Deportation would have separated her from her mother and sister, who had been given permission to stay in the US while they seek asylum. It turned out that the deportation order was a clerical error, and a judge has halted the order for now. But this does not take away the inhumanity of the immigration system.

Houston Police Chief Art Acevedo denounced the deportation order in a Tweet. “This is heart-wrenching,” he wrote. “…Family values? American values? Judeo-Christian values?… The Nazis enforced their laws as well. You don’t separate children from their families! Ever! You’d have to kill me to take my child from me simply because I was trying to get them to a better place for a better tomorrow. I am glad to be on the right side of history.”

Texas is more and more emerging as the front line of the fight for democracy and human rights. The Texas SB 4 “show me your papers” law was upheld by federal courts last year. Among other things it bans sanctuary cities in Texas and essentially makes state and local police an arm of federal immigration authorities, allowing them to question the immigration status of anyone they arrest or detain. A bill currently before the Texas House would repeal in-state tuition for undocumented immigrant students. There is also the Hutto immigrant detention center at Taylor, Texas, which became notorious for the sexual abuse of detainees by guards. Then there was the recent case of the Border Patrol holding men, women and children under a bridge in El Paso behind a fence topped with razor wire. The American Civil Liberties Union called the detention of migrants in outdoor pens “an unprecedented and extreme violation.”

In Texas and elsewhere, the separation of families, the caging of children, the sexual abuse, the tortuous conditions of detention, the raids and the unwarranted arrests and deportations, the illegal refusal of requests for asylum, the deaths of people in government custody—it’s not only immoral for us to tolerate it, it’s a threat to everyone’s rights and freedom.

The economic system is breaking down and can no longer provide for the people, so the powerful are trying to protect themselves by destroying democracy and turning us against each other. But millions are against this assault on democracy and human decency, and they are joining forces. One fighter in Texas reported that those fighting for the human rights of immigrants are becoming stronger and more united. “When we stand together, we have unlimited power,” he said.

People have the right to migrate and to seek asylum. We must end the militarization of the border, and stop the detention and deportation of immigrants. The immigrants are part of America’s working class. If we allow ourselves to be divided, we will all be living in poverty under a dictatorship of the billionaires. There is plenty of everything for everyone. United, the people can take control of this country and build a true democracy where everyone has all they need. Our motto must be “All for each, and each for all!”