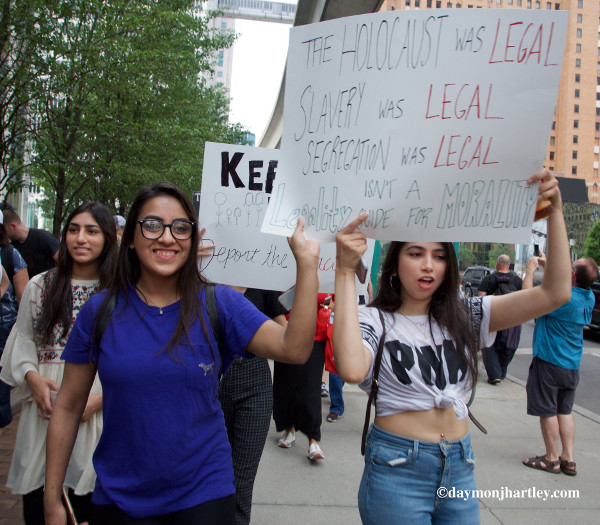 Editor’s note: Below are excerpts from a longer article from the Tribuno del Pueblo. See the full version at http://bit.ly/DACAsupremecourt.

Trump’s decision to rescind DACA (Deferred Action for Childhood Arrivals) has left recipients of the program questioning their future in the country more than ever. For many, the program opened doors to new opportunities . . . and the feeling of belonging.

Now the debate over the legality of the program has finally made its way to the Supreme Court. Families, employers, universities and various organizations all rely on DACA’s existence and that just might be what saves the program.

When DACA was implemented in 2012, Luis was one of the first people eligible to apply. He started working as a dishwasher . . . today, he is a sous-chef in one of Chicago’s best restaurants. The possible termination of DACA threatens his career and puts his family in financial risk.

Prior to DACA, finding a job with a stable income was not accessible to undocumented immigrants. For many, it still isn’t. Armando, however, was hired as a UPS driver and has since been able to maintain a job with great pay and benefits . . . DACA was [also] able to create a sense of belonging for him. Growing up undocumented meant fearing his parents might be taken away in a police encounter.

Karen, a recent college transfer student, spoke of feeling disheartened because of her status. After years of studying, working, and training, Karen was finally able to secure a scholarship to attend a four-year university. Now . . . she worries if her degree will even be worth anything after graduation.

Why is the government doing this? It is cruel to give hope to more than 700,000 people only to later threaten them with losing everything. DACA recipients are worthy of a pathway to citizenship . . . because of their humanity. They are our neighbors and part of our communities. [And] they are only a micro group in the population of immigrants. Parents of DACA recipients, youth ineligible for DACA, and undocumented immigrants of all backgrounds are all worthy of living fearlessly.

In choosing to not pass a comprehensive immigration reform, politicians have shown that they do not care that the lives of millions remain uncertain. The Trump administration has used undocumented youth as a bargaining chip, but they are not the first administration to keep undocumented immigrants waiting for a stable future.

Immigration reform is long overdue and until something permanent happens, individuals like Luis, Armando, and Karen will continue to live by deadlines and uncertainty.