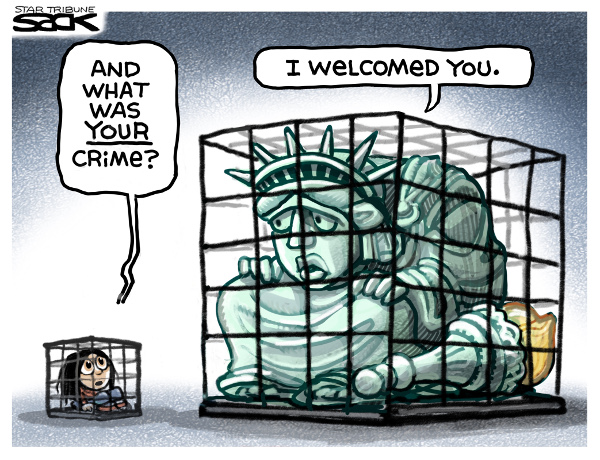 In an action reminiscent of the Fugitive Slave Act of 1850, President Trump has ordered that the elite tactical ICE unit BORTAC be deployed to Sanctuary cities throughout the country during the months of February through May 2020. Because Sanctuary cities protect immigrants, subpoenas are being issued to sheriffs to protect them from repercussions for obstructing their city or state’s Sanctuary policies.

Trump has also granted U.S. Customs and Border Protection special privileges of secrecy and exemptions that further exacerbate the agency’s lack of transparency and its culture of abuse and impunity.

The Fugitive Slave Act required that slaves be returned to their owners, even if they were in a free state. The act also made the federal government responsible for finding, returning, and trying escaped slaves. Today’s modern-day “slave catchers” are a border patrol version of SWAT paramilitary units who normally confront smugglers on the border. Deploying BORTAC to Sanctuary cities is not only a heightened assault on immigrants and a slap at all who oppose Trump; the increased militarization of our streets it represents marks a further threat to everyone’s liberties.

Given the highly polarized Presidential election and the seeming imperial power Trump thinks he commands coming out of the impeachment trial, Trump has settled on a strategy which he feels will propel him to re-election. And Trump’s corporate backers know that if the people are focused on fighting each other, they won’t be fighting corporate rule in America.

Putting children in cages and the ramped-up immigration raids set the conditions for the other attacks on our lives and our democratic freedoms, including suppressing the right to vote and to protest; heightened police surveillance and violence; proposed federal budget cuts that would increase suffering for millions; and threatened concentration camps for homeless people.

It won’t stop with Trump’s effort to abolish Sanctuary cities. Think back to what happened to the Germans, let alone the rest of the world, when they went along with Hitler. The Nazis in Germany (also backed by large corporations) rallied one section of the German people to attack certain groups, and the result was a corporate dictatorship imposed on all of Germany. It’s divide-and-conquer.

The people’s growing response to the spreading poverty and destitution in the country makes the rest of us a threat to the wealthy who run the country. They must feed us or crush us, and it seems clear they don’t plan to feed us.

The antidote to division is solidarity. The defense of immigrants and refugees, as of the homeless, is the defense of all of us. We must take our country away from the corporations and billionaires if we are going to live, and our solidarity as a people is key to doing this.

That solidarity is growing under the banner of “Sanctuary for All.” It is based on the notion that we, the people, are one people, one race, one humanity, regardless of color or religion or national origin, and this includes the immigrants and refugees who have come to our borders in desperate need. And that we do not separate families and lock children in cages, or treat people as if they were slaves. And that we demand and expect a government and a society that will provide for everyone’s needs.